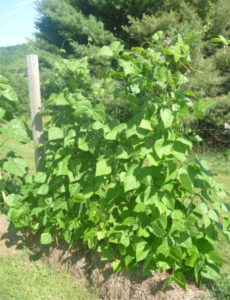 I use the hay for animal bedding, but I also use it for my very ambitious garden, which is still a work in progress. Having gardened for most of my life on the north shore of Long Island, I thought that I was used to working with rocky soil and hills. Hah! It soon became obvious that the ground here is a whole other force to be reckoned with. I have heard the saying “two rocks to every dirt” and it does often seem that way. To make matters worse, in my ambitious ignorance the first year we moved here I ordered six fruit trees, four nut trees, twelve fruit bushes and six grapevines. They all needed substantial holes that were difficult and exhausting to dig. I had no energy left to dig a garden.

I get two years usage out of the hay bales, and then I’m left with beautiful soil to use. As I gradually build permanent beds in my garden, the bales have provided an easy transition for some of the plants that I grow. There are some, like