The seasons are changing fast now, but I’m remembering how exhilarating it was to produce and be a part of the 2nd Delaware County Dance & Film Festival this past Summer here in Andes.  The Andes Dance Collective, led by dancer/choreographers Gloria McLean and Columbine Macher, and composer/musician Marshall Coid, once again brought new dance and music to our area, producing two weekend workshops and two very special performances. Dancers came from New York City, Margaretville, Massachusetts, Maryland and Germany to participate in the workshop which was designed by the trio of directors as a flexible but repeatable “score” fulfilled in the time of the workshops (July 21-24 and August 4-7).

The piece was titled “Movimage” and was built on the idea of using imagery from movies as a jumping off place for the dance. Enhanced by the creativity and performances of guest professional dancers Joy McEwen and Maxine Steinman and percussionist Michael Suchorsky, “Movimage” developed into a satisfying experiment in group participatory creativity and character study. 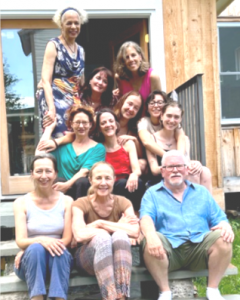 The dance was presented on July 23 in Margaretville at the Open Eye Theater in proscenium form, with the group of 10 dancers and 2 musicians filling the small stage with intensity. The work was altered in the second workshop and then repeated in Roxbury at the Kirkside Park Pavilion on August 6, where it was transformed yet again by the magnificent greenery of the outdoor environment, and yet retained the playful yet serious undercurrents of the imagery each performer embodied in their characters.

In addition to the live performance, dance films were shown featuring the work of three New York City based artists: Kathy Rose, Nancy Allison, and Lisa Karrer. The films by these three artists presented three entirely unique visions of the interplay of movement, perception and imagination in the medium of film. Our audiences also seemed to come from far and near, and stayed late sharing their thoughts and refreshments.  Yes, there is Dance in Andes!~