The mural in the library is coming along “slowly but slowly,” as my husband would say. It’s the Catskills, after all. No “New York minute” around here! Rip Van Winkle is just waking up in the scene after sleeping 20 years. Hopefully I won’t take that long!

So far, besides old Rip with wild strawberries and a mouse at his feet, there is a gnome, a Calico Indian, a black bear, a raccoon, a house wren, and a rabbit scattered throughout the picture, 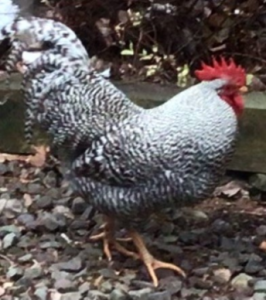 with a scene from the Anti-Rent Wars developing in the background. At some point I need to add Rocky and Adrian.

No, I am not referring to the boxer and his wife from the movies, but to the one rooster and one hen that is all I have left after a Spring and Summer of constant chicken losses, mostly thanks to foxes being fond of chicken dinners.

The rooster looks exactly like one who used to follow me around years ago when I helped at the farm on Long Island. They had named that rooster Rocky because of the breed being Barred Rock, and I decided to follow suit. Of course, the lady who never leaves his side has to be Adrian. These two never stray far from the house, or from people if we’re out in the fields. So I suppose that’s why they’re the last ones remaining.

The Long Island Rocky used to crow right in my face whenever I unearthed an insect while weeding. I’ve since learned that roosters crow for many reasons, and one is when they’ve found food. That explains why my Rocky crows whenever he goes into the coop. “Look, I found the food dish!”~