In 1880, an eighteen-year-old girl name Mary Foy was appointed head of the Los Angeles Public Library. An efficient administrator who could find any book in a few minutes (there was no card catalogue), and hunt down fines like a fiend, she was so young her father had to walk her home every night. More astonishing than her youth was her gender. Until then, no library in America had been headed by a woman. Women were not even allowed to have library cards and had to remain in  Ladies’ Rooms which offered only magazines. Libraries catered to and were run by men, the feminization of library staffs being mainly a 20th century phenomenon.

Think you’re not interested libraries? So did I. But as soon as I began to read The Library Book, that changed. It holds one’s interest in a way few books do. The writing is so good the subject is almost irrelevant. The author knows exactly when to leave a topic and broach a new one, how to pique your curiosity about something not even remotely interesting on the surface, and how to hold your attention fast, minute by minute. Everything she touches comes alive.

A word about non-fiction. In the past forty to fifty years, non-fiction writers have lighted up the landscape with their work. Beginning with Truman Capote, who started it all, they are authors like John McPhee, the British writer Robert McFarlane, Janet Malcom, Ian Frasier, Bill Bryson, and Dave Eggers, to name only a handful. These writers possess a clear, penetrating vision of reality and consummate skill in their craft to such a degree that they present the real world to readers in a way that reveals its miraculousness. They get us to see, to see things we’ve never seen, and to see things we’ve seen before transformed. Susan Orlean’s fascinating account of the Los Angeles Central Library is such a book.

To give you a taste. As she drives her first-grade son, who’s been given an assignment to interview someone who works for the city, to the Studio City branch of the LA library (he’s chosen to interview a librarian), the author remembers being driven by her mother to their local library when she was a child. Once they’re there, everything feels exactly the same. She immerses us in the physical details of the place and its atmosphere, and then comments:

“It wasn’t that time stopped in the library. It was as if it were captured here, and in all libraries–and not only time, my life, but all human time as well. In the library time is dammed up—not just stopped but saved. The library is a gathering pool of narratives and of the people who come to find them. It is where we can glimpse immortality; in the library, we can live forever.”

The main narrative centers on the burning of the Central Library in April of 1986, an event overshadowed in the news by the Chernobyl nuclear meltdown—parallel events in a way. Chernobyl threatens to wipe out humanity, the library fire to destroy human history. The fire burned for seven hours, reaching a temperature of 2000 degrees Fahrenheit. Nearly every firefighter in the city was called in. One million books were damaged or destroyed.

Both employees and patrons were devastated, and the general population as well. By the time one has read only a little way into the book, one realizes that a library is so much more than a collection of books. It is home for the homeless (literally), a place where restless souls find peace, where the like-minded gather to discuss shared interests, a place where thousands of questions are answered daily, where serious academic research is carried out and people come to learn every sort of thing: embroidery, kale farming, playing the stock market.

As she went about her research, Orlean spoke with all the department heads,  people who worked at checkout, guards, custodians, higher level administrators, program directors, and so on. She learned that the library, in addition to books, houses a collection of menus, a collection of sheet music, and a collection of maps, and that the Philosophy Department at one time included books on palmistry, cock-fighting, adultery, bicycle racing, and servant girls. The most interesting stories involve patrons of which two, told by Glen Creason who heads the History Department, remain in my mind.

One day a well-dressed woman approached him and said she had been in the Atlantic Ocean since 1912 and recently had turned herself into a seal in order to come to the West Coast.

Then there were the twin brothers who came to the library to read Thucydides and Herodotus exclusively and told Glen Creason the same joke every day for seven years.

A one-time head, Charles Lummis, who dressed something like Buffalo Bill and wanted everybody to enjoy the benefits of books, advertised the library everywhere he could think of, in public places, in schools, to the railway workers, promising people they would earn more money if they became readers. Patronage grew by so much he had to find new quarters—the third f 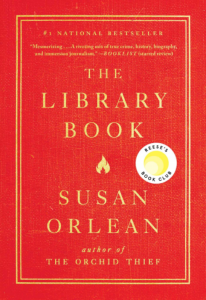 loor of a downtown department store.

The building that burnt in 1986, designed by Bertram Goodhue, was modern and magical, with gardens, a pool, statuary, a central hall with highly decorated arches and columns—a dignified space one could also feel welcomed by and find a home in. After the fire, and much controversy, it was restored to its original luster and expanded to make room for more books and the myriad functions it had come to perform. When I finished reading the book I was sorry to say good-by to it, so intimate had I become with the life of this amazing institution.

P.S. Investigators determined the fire had been the result of arson and although one strong suspect stood out, there was not enough evidence to bring him to trial. No other perpetrator was ever found.~