Got a call about an injured owl up one of the valleys. Went for a ride, and there on the side of the road by Kelsey Grammer’s place sat a great horned owl.  Cars had gone by and it hadn’t moved. Must be in bad shape. I walked down the road a little and gave it wide berth, pretending to be interested in something in the ditch. Maybe it didn’t matter, but my goal was to stress him as little as absolutely possible. This guy had had a hard time already, and catching him would only add to the strain. As my sister and friend Todd moved behind him to block a possible escape route, I pivoted and quickly brought my net down. The bird was amazingly calm as we extricated him. Great horned owls tend to be active, if not a bit truculent when you catch them, and this guy was peaceful. Meaning that even though he looked fine, something was very wrong. Internal injury? Lead or zinc poisoning? He was absolutely gorgeous, and as he was the smallest great horned owl I’d ever seen, I knew it was a male. As in many raptor and owl species, the female is the larger of the sexes, and this fellow was almost half the size of most we’ve rehabilitated. 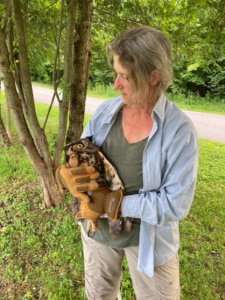 An hour later, he was at the Friends of the Feathered and Furry Wildlife Center in Hunter, where my husband and I volunteer. A cursory examination showed nothing except a slight right wing droop. X-rays, and there it was. Not visible by eye, an abnormality in the wing bone. Determination by the vet: the bird would not fly again, therefore could not hunt, and would never be released.

These cases are tough for us. We try to place un-releasable wildlife with zoos or educators who want them. Unfortunately, no one had room for one more owl, and, more importantly, with the threat of avian flu, places are less likely these days to introduce wild birds into their captive settings. For good reason, they do not want to endanger the birds they already have. With no alternative, this injured owl was euthanized. I know it seems cruel, but in some cases it is necessary, and it is done very humanely, with respect and little stress to the animal. Our hearts are always heavy. It does not get any easier.

Evening on the Hill. Dark is still two hours off, but the air of this hot summer day has cooled to 78° and the sun has dipped below the mountain behind me. Daytime birds are quieting, though the red eyed vireo still calls “Here I am, where are you?” over and over again. Dusky sounds are filling in.

A lone hermit thrush is directly up the hill from where I stand. The ethereal soulfull “flute-in-the-woods” song is my favorite, very favorite birdsong of all. At the sound of it my heart soars and I am buoyed beyond the troubles of the day.

Then, an unexpected call: “Whoo whoo whoo who? Whoo whoo whoo who-ah?”  Usually heard in the dark, a barred owl has started with his cooking song early, but just once. He won’t call again for me, but he let me know he’s around. Near the pond, in the pines above the grassy area, probably hoping for some mice or meadow voles. His call eases my thoughts of the one who didn’t make it. A day begins, a day ends. Who cooks for you? Who cooks for you all.~