When her husband asked Helen Russell if she’d like to move to Denmark for a year—he’d been offered his dream job there by LEGO—she wasn’t sure. A London journalist, the online editor of Marie Claire, UK, who liked her exciting, though stressful, job, she’s been trying to get pregnant with no luck and isn’t quite ready to upend her busy urban life. But, being curious and adventurous, she decides to go.

In Russell’s engaging account, Danish people lead peaceful and fulfilling lives, free of the anxiety, competitiveness, and success orientation that dominate the American workplace. The Danish system shows that human beings don’t have to live in a rat race or just scrape by in ill-paying jobs in order to support themselves and their families. The Danish 34-37 hour work week, six week vacations, free higher education, and unemployment support mean that people can train for the job of their choice, and, if they choose, change jobs easily because re-training is free. These benefits, plus universal health care, old age benefits, generous child care provisions, and numerous other perks have removed the specters of poverty, homelessness, and economic hardship from Danish life. Normal everyday people—no need for exceptional talent, good luck, rich parents, or back-breaking work—can earn a decent living and have time to focus on what makes them happy

In Denmark this means spending time at home with family, exuberantly celebrating the country’s national holidays, taking time for leisure pursuits like hiking, boating, ice-skating, and skiing, going to the theater, attending musical and sports events, or just hanging out at the local café or pub. Things we’d all like to do more of, only we don’t have time. 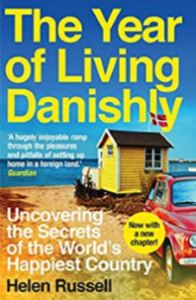 Danes like staying home with their kids, visiting friends and relatives, and enjoying the pleasures of domesticity, an orientation that stems from the Danish tradition of hygge, a word which, loosely translated, means coziness, or, as one reviewer suggested, cocooning. Think sitting around a fire, with good food, good drink, candle-light, warmth, and connection to other human beings. Sound good?

While she was there, Russell read numerous studies about Denmark cultural, social and economic—often interviewing the people who wrote them as well as the heads of government departments. Several of the studies she read compared the happiness of Danish citizens to those of other countries: In every case Denmark ranked the highest—no exceptions. To test this, she asked all her interviewees the same question: Where would you place yourself on a happiness scale from 1 to 10? Not a single person placed himself or herself below an 8, most said 8 or 9, and some said 10.

As she extends her stay, Russell becomes pregnant. Rather than return to London to be close to family, she elects to stay in this country where child care is either free or inexpensive, the pastries are sublime, and the healthy, unpressured life style allows her husband to participate in child care and take time off to be with her and their son.

Thanks to the Danes’ enlightened child care policies, she has time to study, conduct interviews, and write while caring for an infant.

Her story allows one to see the senselessness of condemning such a  benevolent dispensation as “socialism,” with its overtones of Communism and tyranny, when, in fact, it allows men and women to live more humane, more enjoyable lives than the citizens of  “free” capitalist countries where rich and poor alike tend to be anxious, driven, workaholic, and  money-oriented. The 50% tax rate in Denmark has dramatically reduced income inequality and lessened the emphasis on possessing material goods; instead, the work-life balance that the government makes possible allows people to enjoy life, as well as take care of economic necessities.

The system succeeds, says Russell, because of an underlying feeling of trust. Danes by and large trust the government to have their best interests at heart and trust one another in daily human transactions, a phenomenon, she observes, that may stem from living in a homogeneous culture. Nationalistic and patriotic, Danes fly flags a lot and are proud of themselves as a people.

Of course there’s another side to all this, acknowledged in a talk the Danish Prime Minister once gave at Harvard. He identified the major difficulties facing the nation as: the existence of a class of jobless migrants that strains the welfare system, loss of labor and capital owing to the high tax-rate, and a lack of a work incentive among lower income groups. In the postscript to the 2020 edition, Russell adds that Denmark struggles to eliminate racial and ethnic prejudice, a natural consequence of its changing demographic. Yet the strong impression Russell leaves us with is of a nation that believes it can solve its problems through proper government oversight, something which, if her testimony can be believed, it has largely accomplished. We’d do well to figure out how Danish solutions can be applied to the problems we have here. And if someone objects that this would mean creating a “Nanny state,” then I’m all for it.~