If you’re new to Andes you may wonder how the flags adorning Main Street happen to get raised. And what about the hanging flower baskets in Summer, the illuminated snowflakes in Winter and the military banners throughout the temperate seasons? And how is the ongoing job of maintenance—surely an endeavor to reckon with—handled, and by whom? The answer started and continues with the name Bill Day. He motivated and gathered together friends and neighbors into an unofficial but dedicated group he called Stars & Stripes which he shepherded in its organic evolution for two decades. The grief following Bill’s unexpected passing in January of this year extended well beyond Bill’s large family into the community. But nothing about Bill, Mr. Enthusiasm personified, was downbeat. And so, in accordance with his wishes, the “memorial” tribute to him on Saturday, August 20th out back at the Hotel was a Celebration of Life Party. It was held on a prefect Summer day from 2-6, with barbecue, a DJ playing many of Bill’s favorites, a cash bar, and family present. 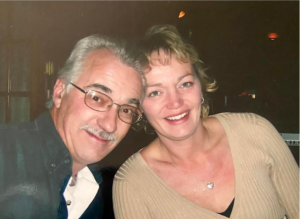 I spoke with Laurie Day, married to Bill since 2008. She re-counted how it was a conversation Bill had with Kevin Roney, a Navy veteran, about his enthusiasm for displaying the American flag, when that seed got planted. After Kevin passed, Bill immediately started the project in his memory. Bill had seen military banners when traveling, and brought the idea back to Andes where it was well received. He jump-started this popular ongoing project which has now been taken up by other nearby towns. Andes long had street-level barrel flower planters; now the more decorative raised planters require timely watering from a pick-up truck. The flowers are selected by Wayne Snyder for their ability to survive dry spells.

Laurie reminded me how Bill’s barn—on the current site of Wayside Cider—was the lively home of Andes’ annual Christmas party and many other dance parties, where dart and horseshoe toss fundraisers took place. When that era ended, Bill took those traditions to the Hotel and elsewhere. 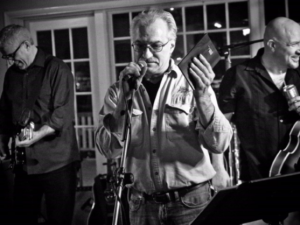 As Bill told it, he was the last baby born in Arena prior to its flooding for the Pepacton Reservoir. He attended local schools before moving to Stratford in the Adirondack foothills, where later as an adult he was active in the fire department and the fish and game club. Transitioning from being owner of a roofing and building contracting business he ran for 40 years, coaching sports at Andes Central School, Bill’s passionate fundraising and organizational skills blossomed further, extending to snowmobiling. He started the Central Catskill Trail Association (CCTA), acting a president for 20 years, heading up many fundraising events. Laurie is grateful to see it carrying on with many young people getting involved and Jonathan LaFever taking over the helm.

Bill carried out a persevering spirit of fundraising for community benefit, done with a passion that motivated many in a style that was all his own.  In the early years of Stars & Stripes he along with Bob Armstrong, Sally O’Neill, Dorothy McArdle and others planned projects together. The commitment of many, like Bob Abbate, continues on. Bob is preparing the filing for the incorporation of a 501 (c) (3), the Bill Day Memorial Community Foundation, Inc., aka Stars & Stripes, which is currently pending.

The party was an event infused with a spirit of conviviality that would have warmed Bill’s heart. If a reader would like to find out about volunteering with Stars & Stripes, reserving a military banner or contributing financially, you may call Laurie Day at 845-676–4912.~