Privilege of the Floor: Town Residents Ask Questions about Proposed Gas Station:  Jeff Ditchek shared that about 10 people had recently met informally at the Andes Hotel to discuss questions regarding the rumored gas station planned for Upper Main Street. At the Hotel meeting, the proposed site was felt to have been proposed in a primarily residential end of town. Jeff and Maria Ditchek inquired directly, Is the site, which rests below our home on the hillside, the proposed site of the new gas station and convenience store? Bud Gladstone noted he had not known about, nor had he been invited to the Hotel meeting, or he would have attended and addressed the questions posed there. Regarding Jeff and Maria’s question, Bud then answered in the affirmative: A business owner, who with his business partner currently owns several gas stations/convenience stores including one in Downsville, is considering that spot for one for Andes. Bud further explained: It is in the open lot on Main Street directly across from Allison Oil and is part of a 7+ acre parcel owned by Christopher Lindsay. The parcel was appealing because it already ties into the town water and sewage systems, and he would charge “best price around” gas prices if opened. Bud has asked around about the prospective owner and received positive feedback from those who know him or have lived near his businesses. The project would require multiple approvals from DOT, DEP, DWS, and the DelCo Planning Board and Town Planning Board. The new enterprise would require a subdivision of a minimum of one acre from the 7+ acres and has yet to be purchased. A project like this is at least a year away from opening if it goes forward. Bud has sought interest in attracting a new gas station as residents or tourists currently travel 30 to 40 minutes round trip (Margaretville/Delhi/Hamden) to top up their cars gas tanks or gas cans for lawn mowing or snow blowing. And residents have limited options for grocery supplies in town after certain hours.

Townspeople asked other questions: Could the Tremperskill Store put in new gas tanks? Shayne Moshier, Councilman, replied that the Tremperskill store was in no position to return to dispensing gasoline as they had had leaks in their old tanks and would not be replacing them with new ones. Could the Argyle Farms General Store return to pumping gas on Main Street? Bud Gladstone shared that he asked Andy Wos about the possible purchase of the General Store for a new gas station and received a definitive No. What would be the look of the establishment; the hours of the proposed gas station/convenience store; emitted light; ongoing noise; and the expected traffic? Concern was raised about conforming to the quality tenor of the community. Those answers were up in the air as the project is far from the specific proposal level but residents may raise them at a Planning Board Public Hearing if project advances to that stage. Council members recalled that when the Andes Health Center project was in proposal state that the concept that the building exterior reflect a scale and design that fit within the surrounding residences and that privacy hedges and boundary walls be constructed, was negotiated with the Bassett Health Group. Have there been discussions about including electric car charging stations on the site? No discussions have yet been raised with the prospective business owner about including electric car charging stations. Does that mostly residential end of Upper Main Street allow commercial zoning? Al Mohr, CEO: Lower Main Street is residential only but Upper Main Street from the blinking light to Gladstone Hollow is mixed use: residential or commercial. Special Use Permits applications for specified use go through the Andes Planning Board, but Zoning code does not need modification to allow a commercial enterprise.

Supervisor’s report: Kimberly Tosi, Town Clerk, has submitted her resignation and she and her family will move to Florida. She was strongly honored by the Board and those present for her exemplary work and presented with a plaque commemorating her service to the community. Deputy Town Clerk Lauren Green was appointed Town Clerk to begin when Tosi’s employment officially ends. 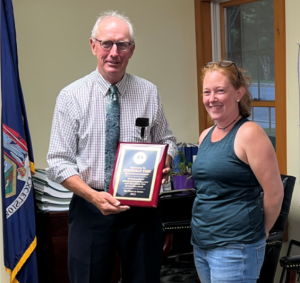 Cell Coverage: Still working to attract a company to activate the cell towers that have been constructed. Difficulty is that coverage is less remunerative now that most mobile plans offer unlimited minutes and volume is no longer as lucrative as it was in years past. Town Clock will be installed soon.

Speeding: The sheriff and state troopers have indicated they will increase monitoring and ticketing speeders within the Hamlet of Andes.

Pool Report: Pool opened June 20th. Has been active through the first 2 ½ weeks, with 106 signed up for swimming lessons. Pool access continues to draw families and neighbors to the open swim sessions. Apparently, a railroad strike somewhere has disrupted and slowed chlorine deliveries and thus threatened to cancel the first day of swim lessons. Serendipitously, the issue with the chlorine supply got resolved when a farmer that Bud Gladstone knows offered to sell a large enough share of his personal supply to carry the pool on through to the end of the summer season. Walton and Stamford are facing the same chlorine shortage and accordingly needed to reduce their pool hours.

Andes Community Day scheduled for August 13, the traditional time on the second Saturday in August. It is also happens to be Jeff Ditchek’s birthday. Jeff will graciously accept any presents offered. Fireworks display at the Andes Hotel received a town permit. Officers and fire department volunteers are scheduled for traffic control during the parade and throughout the day.

Ballantine Park: Town of Andes received the park mowing bill, $1,900, and it exceeds the balance in the Ballantine Park bank account by $500. Donations to cover the shortfall were requested, as this lovely, green town park’s costs are paid solely from community fundraising and private contributions.

Highway Report: Work is ongoing for the truck replacement. Unfortunately, the 2014 International was not won at bid. Bouton is now looking at a slightly higher cost but newer 2016 Western Truck.