I grew up in Louisiana.  My parents were from the Bible Belt of northern Louisiana/southern Arkansas where I spent my formative years in Shreveport.  That is in the ArkLaTex (cute eh?). They had pretty serious accents, my mother especially.  Peg says she made my name, Mel, into 3 syllables but I only really can get 2 out of it; she called me “Maaaaay-el”.  She also said that things were “rill perdy.”  When I let my mind loose to float around the great swirling void in my brain in search of a topic, Perdy Persicarias just popped into focus like on The Magic 8 Ball.  Anyway, Persicarias, more commonly know as fleeceflowers or jumpseeds, are “rill perdy.”

I have Persicarias on the brain because my sizeable patch of Persicaria bistorta “Superba” is just bursting into bloom.  I think it was my first Persicaria and I don’t even remember where it came from. It is a great spreader, but controllable, and has a proliferation of 3 to 4 inch little pink bottlebrush flowers all over it from mid-May until mid-June. It is a very welcome addition to the garden at this time of year when very little is blooming other then Spring bulbs and ephemerals, which are waning, or have been eaten by the critters. The flowers are on little stalks that extend well above the foliage so the flowers blow in the wind,which is kind of cool. This Persicaria is very hardy and has no issues growing in our once zone 4 area. Also, the deer don’t eat it and I have never seen it riddled with insect holes or powdery mildew.

There are Persicarias all over the map in terms of sizes and bloom times, although they all have lance-shaped leaves and seem to bloom in shades of pink to white. There is a little annual Persicaria called Persicaria capitata that I first encoutered in Ecuador that has litle pink ball flower on short stalks that only reach about 4 inches above the ground and forms a densegroundcover. I found it in a nusery in the area once and had it in my garden for several years before it petered out.  Here is a reseeding annual. 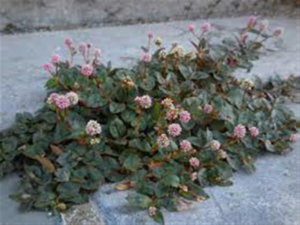 I also have some Giant Fleeceflower, Persicaria polymorpha, that I really love because it is a strong presence in the garden for most of the summer.  It easily gets to be 6 feet tall in my garden with huge white plume-like blooms that are probably 8 to 12 inches in length themselves.  It is one of those plants that you just can’t believe can get that big in one season, because it is a perennial that dies back to the ground each Winter. It is not drop-dead gorgeous.  But it 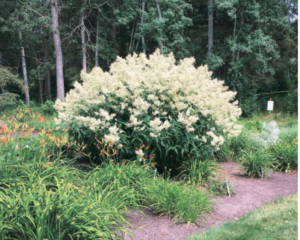 is just so cool to have something that big blooming in that way for such a long time.

I think my favorite Persicaria is Firetail, Persicaria amplexicaulis. It blooms in the later Summer throughout the Fall and is used in masses in a lot of wild, meadowlike plantings.  Its bloom is darker than many of the others and it is a nice height, coming in around 3 feet most of the time.  It does spread nicely and blooms a long time, but I do believe that I have seen deer damage in the places where it is farther away from my house. 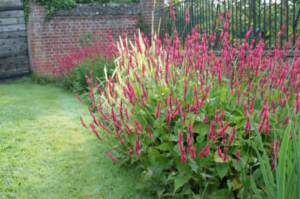 We can’t talk about Persicarias without mentioning our native Persicarias.  There is one that we find in the woods and random places at clients’, but often in shady areas.  It is Persicaria virginiana. It has dark green leaves with little white to greenish-white, beady flowers on long, slender, wand-like stems.  The flowers appear in mid to late Summer, but they are not particularly showy.  The common name for this plant is Jumpseed or Virginia knotweed.  We sometimes leave it in clumps at a client’s as it does look nice even if some would consider it a weed.  It is very hardy and does well in our cold neighborhood.  There is a very cool variegated cultivar of  this plant called Persicaria virginiana “Painter’s Palette.”  It has a very attractive multicolored leaf.  I love this plant and have tried to grow it here, but it just struggles to stay alive and never really takes off.  At my friend’s near Livingston Manor it thrives and spreads. 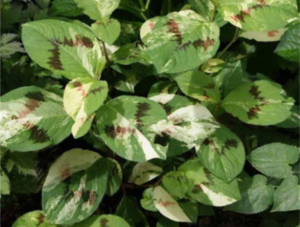 Now I have to get even more geeky on you.  Pericarias are in the polygonum family which is the family of knotweeds, including the very invasive Japanese knotweed.  Japanese knotweed’s botanical name is Fallopia japonica or Polygonum cuspidatum.  The Persicarias often have common names that include knotweed and Japanese knotweed is sometimes called fleeceflower.  There is a horribly invasive persicaria called “Mile a Minute Weed” that has done terrible damage in Connecticut, but is not hardy enough to live here (for the time being).  The plants I mentioned in the column are not invasive, although a couple of them can be aggressive but easily controlled.

Mel Bellar is the owner of Zone4 Landscapes and a passionate Andes Gardener.