BOOK REVIEW: A TREACHEROUS PARADISE by Henning Mankell – May 2022

People know Henning Mankell, if they know him at all, as the author of the recently televised Wallander crime series, based on ten books starring the dogged, solitary, self-critical detective Kurt Wallander, played by Kenneth Branagh. The TV version is spotty in its representation of the novels, which one is better off reading. In my opinion they are the best of Scandinavian crime fiction, which is saying something. But Mankell, who died in 2015, is the author of about 22 works of fiction, an autobiography, a group of books for children, and forty-four plays. He was an author, a theater director, and a social activist. Of the handful of non-Wallander novels I’ve read, A Treacherous Paradise, published in Sweden in 2011, stands out, first because it is simply a good book, and second because of its depiction of the colonial roots of racism. Mankell has the ability to convince us that he is describing people and events exactly as they are, without the slightest swerve into idealization or demonization. This, and the fact that he spent half of his adult life in East Africa as the director of a theater company in Mozambique, make him seem a trustworthy source.

Set at the beginning of the 20th century, the novel tells the story of a young Swedish woman, named Hanna Wallens. Forced from her home by poverty at age seventeen, she ends up as a cook on a Swedish vessel bound for Australia. She falls in love with and marries the ship’s third mate, but loses her new husband to malaria which he contracts at a port in East Africa. Unable to imagine remaining on board after this loss, Hanna jumps ship in another East African port, this one belonging to a Portuguese colony. At the hotel she stumbles on, Hanna has a miscarriage, and is cared for by two prostitutes who work there; what she had thought was a hotel is actually a brothel where all the workers are female and African, and all the customers white and male. Hanna ends up marrying the brothel owner, a rich old man named Vaz, and thus escapes becoming a prostitute herself. Mankell has positioned his protagonist at a crossroads of gender, class, and racial inequality. Hanna’s role is that of innocent observer. From her viewpoint the plot explores the manifold horrors of the system that has produced the brothel—named O Paraiso—and the society that surrounds it.

What comes across most strongly is the way what seems to us inconceivable is accepted as completely normal, and desirable. The prostitutes never sit down in Anna’s presence. The guard who accompanies her whenever she goes out remains at a set distance behind her, never seeking rest or shade, never making eye contact, standing silent and unmoving in the blinding heat. These are the least of the inequities she notices, some of which she participates in herself, to her own disgust. 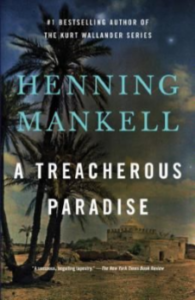 The worst is not discovered until the novel’s end, when she tries to bury her pet ape, who had been brutally killed, beneath a jacaranda tree in the brothel’s garden. Her spade uncovers bones, the bones of all the infants and foetuses born to the prostitutes that had been laid to rest by their mothers.

The bones were all white or grey,” writes Mankell, “but all the foetuses and newborn babies that had been strangled or killed in some other way had been a mixture of black and white.” He continues: “In the end she put down her spade and sat on the bench. She was in torment. The ground in front of her was covered in bones from dead children. It seemed as if this morning, once and for all, she had discovered what kind of world she had been living in.” The physical evidence of the hidden fear and hatred she has all along sensed passing between blacks and whites, a world of lies and mistrust.

There are many other instances of the tissue of falsehoods that hold this society together, instances that instruct the reader in the origins of race and sex discrimination and the lengths to which it can go. As always, Mankell’s writing is precise, austere, and marked by a restraint that gives it power. The whole, a small window, vivid and detailed, on a time and place that provides a record of what can happen when one segment of society is able to impose its will on another.~