I was so happy to hear the call of the robin again. They arrived here on March 9th. I thought that was a bit early, so I checked the records I had started keeping last year. Sure enough, last year they first arrived on March 19th.

During and after the snowstorm on the 12th, I neither saw nor heard any signs of the robins, nor of the mourning doves for that matter. The doves had arrived along with the phoebes during a warm spell in February. The phoebes didn’t stay, but the mourning doves did. Hearty souls, they stayed through a couple of snowfalls. During that last storm, I don’t know if they just hunkered down and stayed quiet, or if they took off with the robins for a weekend at the Jersey Shore.

The important thing is that they’re all back, even the phoebes. One phoebe was very busy today going into the peak of the roof overhang on our larger shed. Did they find some bugs to eat there or did they find a place for a nest? Only time will tell. 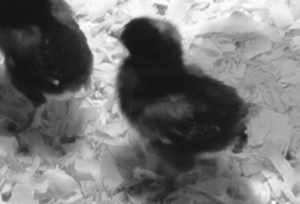 The bluejays are here also. I had heard them around, but this morning I saw two young ones chasing a male robin through the trees. The robin came out unscathed and I realized that he may have been luring the two rascals away from his lady bird and their nest.

Speaking of lady birds, we purchased six new pullets (young female chickens). This year we got a type called Barred Rock. They are said to be friendly and docile, and able to handle both heat and cold. Sounds good to me.

Of course, it was also said that they are not loud, yet we managed to get a loud one. The first night she stood alone under the heat lamp chirping very loudly while the others huddled in a corner. It was like she was giving a concert or something. After a little nap, they all started making themselves at home in their new surroundings, running around, hopping back and forth over the practice-roosting bar, and finding the food and water. Except for our Diva. She once again stood in the spotlight to sing. Loudly.

Finally one of the others went over to her, touched beaks with her, and chirped softly for a while. Amazingly, the Diva quieted down and hasn’t performed since! It leaves me wondering just what that second bird said to her. It must have been good!~