There are numerous plants that I once thought little of, or didn’t “get” that I have come to appreciate, or even love, over the years:  rhododendrons, junipers, zinnias, and marigolds, to mention a few.  There are also many plants that I used to like, that I don’t anymore:  burning bush, barberries, most spireas, blue hydrangeas, for instance.  However, there is one plant that went from totally maligned to practically revered: the Staghorn Sumac. 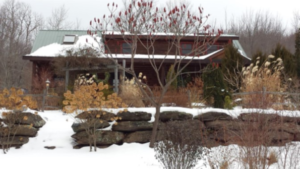 I don’t really know how extreme prejudice against the sumac came about.  It is very prevalent among city folk or “down-staters” in general, but I also think that a lot of the local natives feel the same way.  In the city the honey locusts and sumacs are the trees that show up in vacant lots where buildings meet their demise.  They also manage to grow in any trashed industrial areas along with the rest of the weeds, so perhaps by association we think of them as weeds.   The exotic Tree of Heaven, Ailanthus altissima, is another one of the “weed” trees that can be beautiful but is also incredibly invasive.  The Staghorn Sumac, on the other hand, is native, and even though it forms some dramatic colonies, it is not invasive and lives harmoniously within our native environment. 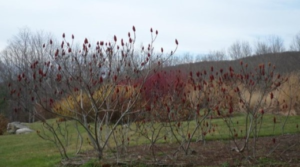 After I became a gardener and was coming up to the Catskills more often, I started to notice the sumac colonies along the road and began to soften towards them.  They do really look great, the way they form those beautiful colonies with taller ones near the center and tapering some toward the edges.  There are a variety of species of sumac that grow in our region, but I am focusing on the Rhus typhina or Staghorn Sumac.  So even though the sumac was “growing on me” in the wild I still turned my nose up when one was in a garden.  I will never forget my first experience doing some gardening for someone in the Catskills, who had a volunteer sumac in his garden.  I just assumed that it was a mistake and made fun of it, and as I suspected, the weekender agreed with me and joined in on deriding the poor sumac.  Looking back on that, it makes me cringe to think that I acted that way. Poor tree!

After I became more educated about native plants, the sumac became even more interesting to me.  The Staghorn Sumac is an amazing plant:  it has a beautiful habit; the branch structure is classic (especially when pruned a little); the flowers/seed heads are Dramatic; and it has striking a Fall color ranging from orange to bright red.  Around this same time, we got a new client in Lew Beach with a large property who wanted an all-native garden. I came up with the idea of creating one of those cool sumac groves as a part of the design, underplanting it with a native ground cover and putting a wood chip path through it so it could be experienced close up and personal.  The client was “all in” on the idea, so we set about making it happen.  First, I tried to order some Rhus typhina from the Catskill Native Nursery which I thought made sense, but they had never tried to grow them and didn’t really have a source.  Then I contacted Guernsey’s Schoharie nursery where I was getting a lot of spruce and other trees for the project, and they seemed to be OK with that.  However, when the specimens arrived, they were quite sad looking!  It turned out that they had just been dug from a wild cluster on the nursery property and they died within a few weeks. I could drag this story out, but suffice it to say that I spent the next 7 years trying to create a sumac grove on that property. Undeterred, we kept trying everything and basically ended up having to transplant very small specimens from the wild (and even then, we still lost about 50% of them and they grew slowly, unlike the one in my garden!).

During this whole process in Lew Beach, I noticed a sumac sapling at the base of some stone steps in my garden.  With my new love of sumacs and my knowledge of their finicky nature, I decided that I should let it grow there.  Boy was that a good decision!  Within 2 years, it was a nice size and now at least 12 years later, it is magnificent.  I have pruned and groomed it; it stands tall and brings me such joy. It is so tall that I can see it from our bedroom window upstairs and even this morning I watched birds sitting in the tree snacking on the seed head.

The next time you see a sumac seedling in your garden, you might consider giving it a chance.  It might bring you joy.

Mel Bellar is the owner of Zone4 Landscapes and a passionate
Andes gardener.~