BOOK REVIEW: A Short History of Nearly Everything by Bill Bryson – March 2022

This book was published in 2003. If you’ve already read it or know about it, stop right here. But if not, read on. Bill Bryson is an amazing writer of non-fiction. A Short History of Nearly Everything, a layman’s guide to the facts of our material universe, is a classic: entertaining, riveting, humbling, and hugely informative. That the fundamentals of recent scientific knowledge could be made into such fascinating reading is startling enough. But the grace and lucidity with which Bryson explains complicated ideas and summarizes vast amounts of information boggles the mind. If you take the book seriously it will upend your notions of who and what you are, what life is, what “the world” is, and what the meaning of it all is, if there is such a thing as meaning. 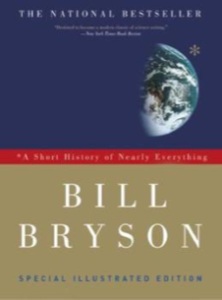 And yet the conditions for life are so specific—the nature of the atmosphere, the presence of light and warmth, our distance from the sun, the atmosphere that protects life from bombardments from outer space, the presence of certain chemical elements—e.g., nitrogen, oxygen, hydrogen, carbon—the size of the oceans (without them there wouldn’t be enough oxygen to support life), and the miracle that allowed the animals that evolved into humans to survive the five extinctions that preceded us—these conditions might seems to preclude the possibility that they could ever arise again. The answer isn’t clear. But this may give you a sense of the work’s scope.

The following passage conveys the book’s local texture and the humor that pervades it. Bryson is describing the taxonomic difficulties that faced Linnaeus and other scientists who attempted the classification of life-forms.

Whether a species of grass should be called Aegilops incurva, Aegilops incurvata or Aegilops ovata may not be a matter that would stir many non-botanists to passion, but it can be a source of very lively heat in the right quarters. The problem is that there are five thousand species of grass and many of them look awfully alike even to people who know grass. In consequence, some species have been found and named at least twenty times, and there are hardly any, it appears, that haven’t been independently identified at least twice.

Bryson teaches us about grass with tongue in cheek; his wit leavens the entire book. The discussion of naming ends with the sort of “wow” observation that recurs continually throughout.

The rather amazing fact is that we don’t have the faintest idea—”not even to the nearest order of magnitude,” in the words of Edward O. Wilson—of the number of things that live on our planet. Estimates range from three million to two hundred million. More extraordinary still, according to a report in The Economist, as much as 97 per cent of the world’s plant and animal species may still await discovery.

Despite the enormous quantity of information now available, statements like this, repeated in a range of contexts, impress upon the reader how little we know about the world we inhabit. It’s not just that there’s an untold quantity of knowledge still beyond our grasp, but even more affecting is the sense that, given the magnificence and scope of the universe, and the fabulous proliferation of phenomena that exist on this single planet, in short, because of all that we do know, it’s dramatically clear that we have not the slightest notion of where we fit in, what difference our existence makes, or who, in relation to it all, we human beings are. The disparities in scale between the cosmic and the infinitesimal, and between our experience of time measured in hours, days and years, and the billions and billions of years it’s has taken to produce our tiny earth and the comparatively minuscule amount of time our species has inhabited it—these disparities are so great, that they whisk away any sense of importance or consequence we may have.

The effect is liberating as well as humbling. While the new science seems to reduce the grand narratives of human history and religion, and the monuments of culture to self-important gestures, it may be that there’s an account of human existence that follows from these discoveries that will find a place for us in the new picture. Bryson’s heroic account of modern science can only enhance one’s appreciation of the world’s multitudinousness, complexity, and fragility. The title of the chapter from which I’ve quoted—“The Richness of Being”—may provide a clue. If we humans are not the acme of creation (as we’d been led to believe), at least we are as much a valid part of the wonder as anything else, and the dramas we find ourselves caught up in from day to day have no less importance—though perhaps no more—than the electron dance or the birth of suns.~