A CONVERSATION WITH KIMBERLY McADAMS TOSI: OUR TOWN CLERK – March 2022

Most everyone reading this knows or has met Kim, either from her days as a student at the Andes Central School or encountering her at the Town Clerk’s Office when obtaining a sticker for the transfer station, or applying for a hunting license, or at a Town Board meeting. But I’ll bet that most people have no idea about the extent of her job responsibilities, or her path to this post, one she was elected to 11 years ago at the age of 24. So read on!

Yes, Town Clerk is an elected position, in Andes for a 4-year term, and it is an autonomous one. Before I could even seek a comment from him, Bud Gladstone, our Town Supervisor, whose responsibilities extend to County government, (who knows she doesn’t work for him, or for the Board, but on behalf of the Board, that she is her own “boss”) offered enthusiastic praise. “Kim does an outstanding job, and is a pleasure to work with. I have the utmost respect for and trust in her. She is extremely detailed with her advice, knowledge and her support in helping me do my job. A few times I’ve had media people tell me that Kim had the most organized agenda for Town Board Meetings of any Town Clerk in the County.”

Kim’s specific job titles are (I’m taking a breath): Town Clerk, Water District Clerk, Sewer District Clerk, Records Management Officer, Registrar of Vital Statistics, Benefits Administrator and Personnel Officer. I can only wonder how she manages to handle all those roles as efficiently and competently as she does. Kim says that when she came into the position, following Janis Lynn Jacques, whom she defeated in an election, she was faced with a blank computer. All records up to that time had been hand-recorded in registers and notebooks. Kim moved gradually from using WORD and EXCEL platforms to tailored Town Clerk software and QuickBooks. Not only have these hugely timesaving improvements allowed information to be more easily retrieved and shared, while providing significantly more transparency than previously, they have the added benefit of facilitating the recovery of any deleted materials, with the explanations for why they were deleted.

As we citizens are well aware, the Town now has an attractive and functional website www.townofandes.com which includes information on the Town offices, minutes of Town Board, Planning Board, and Zoning Board of Appeals meetings, and on new legislation. It’s where you can find contact and other information for the many Town departments. Readers can also find news and updates, archived financial reports as well as the history of the Town and links to other organizations. Another initiative Kim has taken is making it possible for anyone to subscribe to receive Town emails with notices of board meetings, public hearings and pertinent news. The reminder to hamlet residents to keep our water taps running during the recent cold snaps was a preventative lifesaver for many! Another responsibility of her job as Town Clerk is the opening and setting up of polling places during elections, as well as the hiring of election inspectors, Democrat and Republican alike.

I was intrigued to hear Kim’s personal story. (I knew her back when I was a substitute teacher. She was then, as now, a smart and sparkly personality.) She lived with her family on the Tremperskill, two doors from the Tremperskill Store until, when she was 8, the family moved to Engel Road, off Gladstone Hollow, where her parents still reside: Mike McAdams, originally from Roxbury, who worked for the Andes Highway Department for 44 years, the last years as Superintendent of Highways and Sandra McAdams who grew up on an Andes dairy farm on Fall Clove Road, and is currently Mortgage Operations Manager for The Delaware National Bank of Delhi (people remember her from the many years she was at the Andes Branch of the NBDC). 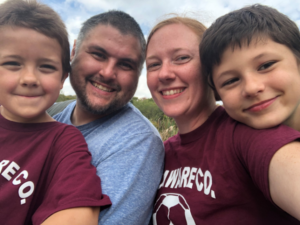 From the age of 10 Kim aspired to be a lawyer. During her senior year in high school she participated in a special BOCES program, New Visions in Law and Government, which awarded 9 college credits. It included job shadowing of every single department in the County and spending a half-day weekly at the Delhi Town Hall. She also took part in the Youth Court (a program of the Delaware County Youth Bureau). She and the other young people had the opportunity to rotate through every role in the Youth Court, where the participants adjudicated monthly at the trials of the juvenile offenders who came before them. After graduation in 2005 Kim attended SUNY Albany for a year as a pre-law and psychology major. She and her boyfriend, soon to be husband, Jesse Tosi, who had spent his senior year in Andes after moving up from East Islip, Long Island, decided to marry when his job with the Air Force took him to Shreveport, Louisiana. During their 3 years there they bought a house and Kim continued her education online. Over time she pursued paralegal studies and obtained a BA in Sociology from Ashford University.

After a time living in New Jersey, and the births of sons Sebastian in 2009 in Louisiana and Skyler in 2011, they moved back to Andes and bought a house on Wolf Hollow. Kim worked for the Highway Department and, as a FEMA administrator, attended Andes Town Board meetings along with her father. You can see how she was drawing together many strands of her education, personal interests, experience and observation that would feed into the career she now holds! Her husband’s job as assistant store manager at a Walmart in Kingston required long travel time, and was not his ideal job, so the decision for Kim to run for Town Clerk made great all-around sense. It would allow them both to spend more time with their boys, presently home-schooled, enabling them to get the boys to sports activities and the gym, and she could sometimes bring them with her to work. 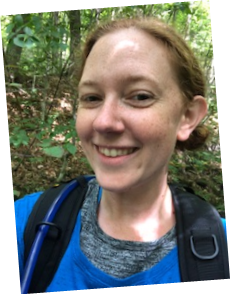 To help ease her way into office, Kim attended the Newly Elected Officials School for 3 days in Albany put on by The Association of Towns. A FOIL expert and the State Comptroller were among the presenters. She can access up-to-date Town Law on line whenever an issue arises. Those old law books on the shelf with their updates, must feel obsolete.

It seems clear that this is a great fit of a career for very personable Kim, where her interest in serving the community melds nicely with her wide skill set as she inhabits a diversity of roles, and still accommodates her family life. She is currently broadening her experience with another job, a challenging one as a Director of the Delaware County Electrical Co-operative, where directors are paid on a per diem basis.

The official current office hours for the Town Clerk are Tuesday through Thursday, 9-3, and evening meetings, which she has facilitated on Zoom. Kim performs a lot of her work from home, where she can answer emails and have time for writing work that requires extended focus, such as—I’m guessing—polishing meeting minutes, writing the Resolutions that the Town Council will be voting on.

I have found Kim to be very responsive to text messages. Her mobile number is 845-807-2978. Her office number, where you can leave a message, is 845-676-4791. Her email is andestownclerk@gmail.com And of course we recommend that our readers frequently visit the website www.townofandes.com, even when you don’t have a specific need for information. It’s always a good idea to be involved with the workings of your town government. And remember, Kim is here to be of service to the people of Andes.~