Granted, not everyone is ready for a 542-page, 2,000-year history of Christianity in a paperback so thick you wouldn’t take it on a plane. But don’t go away. This book is terrific. In a rip-roaring style, packed with vivid anecdotes, little-known facts, and surprising conclusions, it takes you on a ride you won’t forget.

I bought it because Native American writing had shaken me out of the long dream most of us share about who we are and what the world is. I felt I’d begun to break out of the prison of my birth—Western culture. Indigenous peoples are taught by their elders that animals and plants are their equals, that they belong to the earth, that they need to be awake to the enormous range of subtle messages the world sends them through their intuition. I, on the other hand, was taught that animals are inferior to me, plants even more so, that the earth is there for humans to use, and that reason and science are the gateway to reality. The Native American worldview showed me that my most basic assumptions about life—unconsciously held—had come from a particular historical tradition that had no more claim on the truth than any other. Tom Holland’s book on Christianity, I thought, might enable me to see those assumptions more clearly, and free me somewhat from their control.

Since I can’t summarize the contents of such a massive work, let me set down the main things I learned. First, the Greek and Roman civilizations that Christianity penetrated bore only a small moral resemblance to the values I inherited. Aristotle believed that non-Greeks were inferior to Greeks and could therefore be enslaved with impunity; he also held that men were naturally superior to women. Julius Caesar, in his conquests, killed and enslaved millions, with no thought that he’d done anything wrong. The Greco-Roman world viewed inequities between rich and poor, slave and free, conquerors and conquered as natural and inevitable. There was no ethical imperative to level the differences.

At the time Jesus lived, the ideas that the meek would inherit the earth, that the last would be first, that all people were equal and reflected God’s image, that serving the poor was a duty, that faith, hope, and charity were the greatest virtues, and that God had become an impecunious, itinerant preacher who suffered a horrible, humiliating death reserved especially for slaves—all of these things were revolutionary, blasphemous, and frankly unimaginable. 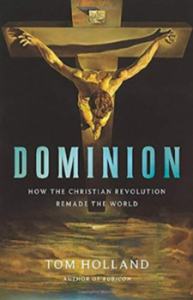 The second discovery was that the urge to purify, cleanse, and renew Christian practice and belief was practically simultaneous with Christianity’s birth. What we know as the Reformation was only the most notable and widespread of a long series of similar movements–Martin Luther was not the first to challenge papal authority. The Donatists, the Taborites, the Waldensians, the Diggers, and countless other sects from the first century CE onwards arose to root out official corruption, idolatry, moral laxity, and the flagrant exercise of power, answering a call to restore the faith to its origins in poverty, humility, and self-sacrifice.

The third and most interesting revelation was that Christianity gave birth to the idea of the secular. Before this, in the ancient world, what we think of as religion had not been a separate entity cordoned off from the world’s doings—its politics, economics, and social arrangements—but woven into the fabric of daily life, rooted in local practices, pervading every aspect of existence. Christianity, by contrast, set itself up as a set of private beliefs separable from a person’s role in the world, a set of beliefs, moreover, that could be transported from place to place without any loss of integrity. The political regime of the Roman Empire, with its eclectic assembly of tribes and nations, became the model for Christianity’s universalism as a religion. Like the Empire, it could take over anywhere.

Starting in the 19th century this division between church and world began to assume a new form, as the Christian ideals of loving one’s neighbor, serving the needy, and valuing all human beings equally became detached from their origin in Christian organizations and migrated to new settings. Humanists, atheists, and agnostics all lay claim to an identical set of values and, often rightly, criticize the churches for not putting them to work. Holland argues that notions which seem to us now to be universally true, such as human rights, individual liberty, and the dignity of every person are not founded in an objective reality, did not come about through the exercise of reason or the discoveries of science, and did not first emerge with the political upheavals of the Enlightenment, but are found in the letters of St. Paul. And he maintains it is on this account and not any other that no one who has grown up in the tradition of Western European culture can stand completely outside the basic principles of morality that Christianity introduced.

I now see Native American reverence for all of life as an instance of the pre-Christian world in which the sacred and the mundane were in a state of unity. And I hear in the right wing cries for maintaining individual liberty at all costs an echo of the desire to remain true to an originary notion of what is to be an American, analogous to the Christian desire to return to a purer faith. And I understand my current preference for the indigenous perspective as nothing more, or less, than the result of my own evolving experience of the natural world.

Speaking of which, one important issue Holland does not address is nature. And why? Because nature does not figure significantly in Christian teaching. An omission that, along with the alienating effects of technology, has shaped the relation we all have to the wondrous world around us.~