To spend part of a morning with Jan Stevens is a pleasure. It’s easy to see why so many Andes Central School students over the past 20 years found her office an inviting place to linger for a moment’s warmth in their busy day. As her daunting jobs at ACS required, Jan was super-organized, yet always flexible, ready at a moment’s notice to take on the unexpected.

How did she come to be there—ACS Treasurer and Confidential Secretary to 8 Superintendents? Janice grew up on the family farm high on a hill in Fish Hollow with her parents, Doug and Doris Stevens, her older sister Carol; and young brother Dale and an uncle who was still in high school when she began to trot down the hill to the bus driven by Mel Ruff (“He was great!”). She feels lucky to have grown up on a farm.

At graduation, Jan, Salutatorian in a class of 26, felt terrified to give a speech but gratified to receive her diploma from her father who was then President of the Andes School Board. Jan took an AA degree in Secretarial Science at SUNY Morrisville. After working at O’Connor Hospital in medical records, she became a secretary at the ARC.

Charlie Smith, ACS Superintendent, called her to ask if she would interview for a job as assistant to the school Treasurer, Gussie Frisbee, who was about to retire. She said, “Yes,” and got the job. At that time payroll, bookkeeping, budgets, and all staff financials were done by hand and the job was becoming more and more complex. She was in charge of human resources, working with the state and preparing budgets as they came due. Computers made it easier to manage, and when BOCES opened a Shared Office it took some of the burden off of her shoulders. 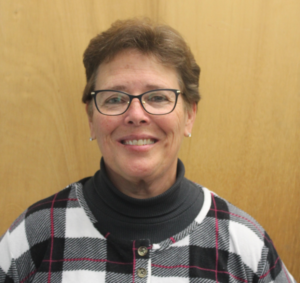 In the beginning, she worked closely with Janis Reynolds, Confidential Secretary to the Superintendent. When she retired, Jan took on that role serving successive Superintendents: After Mr. Smith came Dee DuBruno —an interim—then Charlie Casler, next Richard Little (“Tom’s dad and very nice!”) He was followed by Jean-Pierre DuMortier and John Burkhart. Jan recalls that she got along well with all of them. In the 2000s, we have John Bernhardt and Dr. Robert Chakar. She enthuses, “ Both are great to work with. They are very different and very special.” She mentions that when she broke her leg a few years back, Dr. Chakar ferried her back and forth from Fish Hollow until she could manage the drive. John Bernhardt retired but came back to coach basketball and work with the Drama Club.

With an office tucked into a public hallway, I suppose Jan could have closed the door to focus on her roles as Front Desk and Treasurer, but being who she is, she became the heart of the school. Spirit Day? She wore the chosen color. Poetry Day, with the lobby draped with extra poems in case some child or teacher misplaced theirs? She took part. Walk-ins dropping off SnakPaks on a Friday afternoon? Jan made room. Always gracious and eager to help.

She cherishes a wonderful new change at ACS: Instead of a Senior Play with only the upper school involved, ACS now puts on  two musicals, Fall and Spring, that feature every class from pre-K to seniors, plus faculty and the two most recent Superintendents on stage. Jan handled the ticket booth and never missed a performance. Her favorites? “Mary Poppins, The Sound of Music, Jonathan Andrews’ take on Star Trek… Oh, they were all wonderful!” Covid-19 closed Frozen two weeks before it opened. A blow to all.

Retirement was a difficult choice. Fortunately, since Jan is irreplaceable, it will happen gradually. She still comes in 2 days a week to orient Heather Evangelista, her very competent successor as Confidential Secretary to Dr. Chakar, and to fulfill her duties as Treasurer.  She enjoys the kids. “They make me laugh! And the staff is great. They gave me a Surprise Cupcake Party in June. Kids kept coming up to say, ‘We don’t want you to go!’ It’s such a special place.” ~