On Saturday November 22nd, Andes residents Gloria McLean and Ken Hiratsuka hosted a film screening of two short films on the theme of Indigenous Peoples’. It was an occasion to congratulate Andes local, Victoria Kupchinetsky, for her award-winning documentary titled “The Lakota Daughters,” which received the prestigious Gracie Award for Outstanding Original Online Content-News Documentary in 2021, and is being shown in major film festivals across the country. Against a background awareness of problems of poverty, drugs, addiction, and frequent disappearance of young women in the Pine Ridge reservation in South Dakota, the film follows the work of Lakota women to establish “a girl society” that fosters resilience and self-assurance in girls aged 10-18, and empowers future generations of Lakota women in their strong, matrilineal traditions. 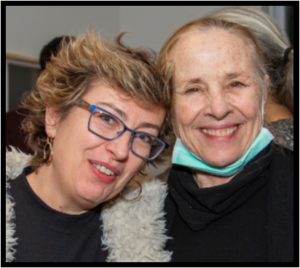 Paired with this was a film, “Plains Daybreak,” a work of choreography created by the noted Modern Dance choreographer Erick Hawkins, in whose company Gloria McLean was a lead dancer from 1982-1993. Hawkins, called “the poet of Modern Dance” by Anna Kisselgoff of the NY Times, was deeply inspired by Native American culture and values. He often said that it was only in seeing the tribal dances of New Mexico and his native Colorado that he was given the image of a man dancing with full dignity. “Plains Daybreak,” premiered in 1979 and performed over 500 times around the world, does not try to re-create any type of Indian dance, but instead offers a poetic work in its own terms of newly created dance, musical score and set. It is a ceremonial vision of the “first day on earth, a view that sees man in harmony with nature.

The audience engaged in a lively conversation, touching on some of the issues raised by Kupchinetsky when she asked, “Can we, as white people, have the right to tell these stories?” Along with Director/Filmmaker Kupchinetsky were members of her team – Misha Gutkin, Story Editor, and Matvey Kulakov, Film Editor. Also on hand was Cynthia Reynolds, McLean’s colleague from the Erick Hawkins Dance Company, who was part of the original choreographic process. It was a great evening in the new LifeDance Studio at Squid Farm which promises to foster dance, art events, and cultural conversations of interest to our community.~