Elizabeth Strout won the Pulitzer Prize for Olive Kittredge in 2015. An enthusiastic and faithful fan, I’ve read all of her eight novels. Her fictional world is set mostly in either Maine or New York City and sometimes the same people turn up from book to book. At first I thought that Oh, William was different. Not in quality so much as in its style and its relation to reality. This novel, I thought, was out-and-out autobiographical. The tone is one of unvarnished sincerity, so earnest and forthright—and even naïve at times—it seems inconceivable that this person is telling you anything other than the absolute truth. When it emerged that the narrator is actually the title character from one of Strout’s previous novels, Lucy Barton, I bought it hook, line, and sinker. Oh, I thought, this means that Lucy Barton, too, was the author’s own story all along. The narrative voice in Oh, William is so realistic that I never wanted to put the book down—occasionally she even seems to be at a loss for words, the way people are in normal conversation. 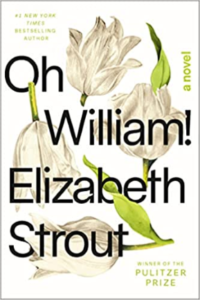 That last bit, of course, should have been the tip-off. When is a novelist ever at a loss for words—in her own novel? When is she not responsible for every effect she creates? And when does a writer of Strout’s sophistication suddenly change into a person talking somewhat disconnectedly about things that happened to her? So, no. This book is not different. It’s not ripped from real life, raw and dripping. In its faux naif quality it may be the most skillfully worked piece of writing the author has yet produced. The fact that I so trusted and believed that the person speaking was Strout herself is proof not of her having finally stepped away from the role of novelist, but the ultimate proof of her artistry.

Just to make sure, I decided to compare the verbal style of Oh, William to that of Amy and Isabelle, Strout’s first novel. As I suspected, that beautifully written book wore its artistry on its sleeve. Each word is exactly right, the rhythm of each sentence finely calibrated. Nothing is unsure, tentative, or out of place. Strout was performing in public for the first time—everything had to be perfect. (If you haven’t read Amy and Isabelle, you should.) But now, with Oh, William, Strout has rolled up her sleeves and gone beyond perfection. She’s created the illusion that you are on the receiving end of a long one-sided conversation in which a sixty-three-year-old novelist, is telling you, a bit clumsily, the way it really is for her. An over-the-top fabrication.

Does this mean that Strout is lying to us? Does it mean she’s not revealing what lies closest to her heart? Not at all. Her aim is the same as always: to touch the reader’s heart by the compassion with which she portrays her characters—appealing, complicated, quirky—making us feel seen and comforted by her understanding of the human condition. Though this novel is far from the tell-all piece it first appears to be, much of the material may well be drawn from her own life.

The story concerns a woman who is trying to understand her first husband, William, whom she divorced twenty years ago. As memories surface, the seemingly haphazard order in which they’re told creates an effect that sometimes veers towards stream of consciousness. Lucy pieces together past events, comparing them, remembering things she’d long forgotten, and they speak to her in ways they never had before. An overheard remark suddenly resonates. She has questions. It’s as if she’s putting together the pieces of an old puzzle but they’re not making the same picture.

The action isn’t confined to recollection. As she’s telling the story, Lucy’s second husband has died and William’s present wife has left him. Feeling abandoned and wretched, he turns to Lucy for comfort. At his request they meet for meals, go on a trip together. He lets her see how hurt he is by some of her remarks, made without thought, and depends on her to help him deal with discoveries about his past that have come to light. She starts to learn new things about him, about herself, and about her mother-in-law who played a large role in their lives. Time after time during this process, things are not the way she’d always thought; people turn out to be different from what anyone had supposed; it’s possible that no one has understood anyone else, down to the ground. But Lucy’s desire to know the truth, to figure things out, to finally understand, keeps us riveted from start to finish.

If the end result leaves both the narrator and us with more questions than answers, so be it. Going on the hunt with her is what matters.~