In 2020 Richard Powers won the Pulitzer Prize for The Overstory, a novel that took its readers’ understanding of the natural environment and especially of trees to a new level (reviewed here in July 2019). Science fiction novels on the subject had covered similar territory, but none with the same conceptual range and spiritual depth. So when I saw he’d published a new work, I rushed to get a copy.

Bewilderment is well titled, though not in the way the author intended. I was bewildered half the time while reading it, put off by the scientific jargon, failure to explain the psychological and emotional “training” at the center of the plot, and confused by descriptions of life on other planets so vivid and convincing that you couldn’t tell whether they were real or not—a deliberate move on the author’s part, but one that produces continual discomfort while you’re trying to understand it. Another significant flaw of the novel is that it mounts an attack on the Trump administration so thinly veiled as to be embarrassing, accompanied by some ill-conceived sideswipes at religion. I can see why Powers might have felt obliged to politicize his story, but the effort falls flat. 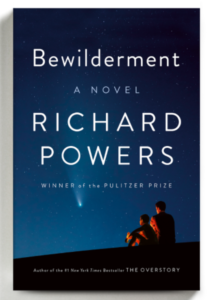 The novel’s main thrusts are ambitious and fascinating enough: the search for signs of life in the universe, and the search for ways to help humans to develop more capacious and compassionate forms of consciousness. Powers’ way of linking these aims is ingenious, if at times a bit contrived. The narrator, Theo, an astrobiologist, uses his knowledge of the billions of galaxies statistically likely to contain planets like ours, as well as made-up descriptions of planets whose geological composition and life forms exceed our wildest imaginings, to distract and entertain his emotionally challenged son. The nine-year-old Robbie is frighteningly intelligent, super-sensitive, and hard to manage. Some of his difficulties arise from the loss of his mother, whose death in a car accident has traumatized both father and son. Since Robbie’s impulsive behavior makes him, (in the eyes of the authorities, a candidate for psychotropic drugs (he threw a thermos at his best friend in the school cafeteria, drawing blood), his father is tasked with finding a way to keep Robbie from being sedated yet still able to function acceptably.

When the promise of a trip to yet another imaginary planet on the “transponder,” a computer on steroids, can’t keep Robbie from acting out, a colleague of Theo’s at the university where he works offers him the opportunity to submit Robbie to an experiment in which he’ll learn to access at will supremely desirable mental and emotional states. Somewhat unbelievably, these states were previously “recorded” in a laboratory by none other than his mother, Alyssa.  Saint, martyr, wizard, genius, and political activist, Alyssa is the emblem of everything the novelist admires. He brings her to life in flashbacks that persuade us she really existed. Remarkably attuned to the inner lives of human beings, she can enter into the experience of other animals to such an extent that she has devoted her life as the head of a non-profit agency to their protection. Abounding in love and affection for her husband and son, she appreciates the marvellousness, complexity, and infinity of creation.

Under the influence of her mind states, Robbie’s behavior starts to change. He learns to relax around his rage. He becomes transfixed by the humblest forms of wildlife. His drawings of plants, animals, bacteria, cells—everything from chromosomes to rhinoceroses—radiate energy. Having been permitted to be homeschooled, he has the time to pursue his interests unimpeded. Where this all ends up, I won’t say. You have to see for yourself. Towards the novel’s conclusion, Powers gives us several moments of transcendent insight such as only he can produce. Despite my complaints, I’m glad I read this book and am tempted to read it again, as I did The Overstory. You can’t successfully grasp Powers’ conception of what’s possible in the universe, on both the inner and outer frontiers, in one go.~