I find confession, unburdening, and sharing my failures and mistakes very therapeutic.  Admittedly, I am sometimes quite challenged with finding new topics for these columns. This is after all my 94th effort and 8th year of doing this. Often, I have to check my log to make sure I am not repeating myself. However, this subject is a first.  I am quite sure that I have never written specifically about my mistakes before.

Let’s start with a particularly embarrassing and consequential one. For many years, I had a source for a good-looking dark wood mulch that we often used. The fellow we got it from was selling his property and closing his business, so he offered me an unbelievable deal on the remaining mulch. We stock-piled 40 or 50 yards of it.  As the mulch aged, my coworkers and I started confusing the mulch for compost because they looked so similar.  This happened so often that I got the brilliant idea of cutting cost on a big project by using the “mulch compost” as a planting medium. It seemed like such a great idea that I also used it on a project at my own house (lest you think I was just experimenting or trying to put one over on a client). I truly believed that it would be fine, as did my coworkers. Also, I had heard stories from colleagues about successfully planting grasses in practically virgin wood chips.  Of course, it would be fine!

We planted the client’s garden in June, and by September we (including the client) started to think that the plants were not doing so well. I had had the uneasy feeling in the back of my mind that I was going to pay the price for this experiment. At this time, I also realized the geraniums we had planted in my garden (that always take off) were not doing well either. Then, much to my horror, I realized that no weeds ever seem to grow in the mulch piles we had in several locations. Duh!!! My heart sank as the realization settled in.  How could I have not noticed these things earlier and pieced the clues together? I sent a sample of the mulch off to a soil testing lab and it was shocking how few nutrients actually existed in this mulch that paraded around looking like compost.

Fast forward to me fessing up to the client about this mistake. We then spent hours gently removing the mulch from around the roots of the plants in this rather large garden. It was very tedious, laborious work which required us to haul away 5 to 6 yards of it in spackle buckets! Afterwards we had to replace all of it with good garden soil (rich mushroom soil to be precise), once again using spackle buckets and our hands since the plants had grown in some. It was grueling work, as we had no access with a wheelbarrow (it was terraced), much less our tractor. Subsequently, we did yet another top dressing with good compost. The good news is that the garden responded very well, and it is doing beautifully now. My garden was a bit easier to rescue. We used the backhoe to tear out the mass of geranium macro rhizomes planted in the “toxic mulch” (what we call it now) and started all over. This was an experience that I never hope to repeat. I will always listen to the little voice in the back of my head from now on.

Another epic mistake… When I first started my business in 2005, my then business partner was very fond of a red-leafed cherry, Prunus Canadensis “Shubert Select.” It is native with a nice habit and red/purple foliage, but the new growth is a light green. It is a beautiful and interesting specimen. We loved it and planted it fairly often in our early clients’ gardens, including Bob Lidsky’s, whom many of you probably know. Quite a few years later, I ran into Bob, and he shared that he had to have all of the Shubert Select trees that we planted removed because they had all been overwhelmed with black knot. At that time, I had never heard of black knot.  But I quickly learned that it was a common fungal disease among native members of the Prunus genus, which includes the Prunus canadensis.  Yes, there was more heart sinking, as I realized how many of these trees I had planted over the years. Especially 5 huge ones that we had recently put in, planted in locations that we could no longer access with machinery. Indeed, I checked those trees the next day and they all had black knot. ARGH! 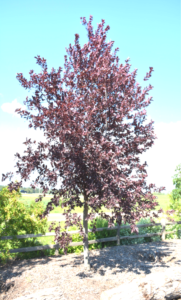 Black knot is manageable if you don’t let it get too bad, but you have to prune it out a couple of times a year and it is a pain, especially as these trees are at least 30 feet tall now. And, the black knot has been really bad lately. 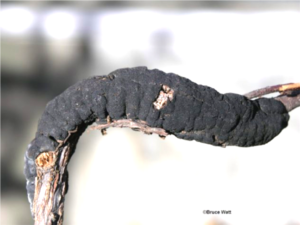 But from mistakes come lessons learned.  Now I make it a point to learn a lot more about potential diseases that afflict things that I plant. Also, I will never again buy trees with any potential problems without seeing them and picking them out myself. The 5 big Shubert Selects mentioned above were chosen by a wholesale nursery in Westchester and delivered to Andes without my ever seeing them.

Of course, I have made many more mistakes that I would like to share. But they are going to have to wait until another time. I will add these warnings… think twice before adding a water feature to your garden, watch out for creating drainage issues and don’t plant Anemone Canadensis in a bed with other things.