On Saturday, August 14, Andes Community Day, three of our younger Andes citizens exhibited the true meaning of community.  Charlie Orio, Leonardo Giasson, and Saul Bouquet set up a stand on the corner of Main Street and Delaware Avenue.  They sold a variety of products including homemade popsicles, hand-stitched pillows, and homemade pink lemonade.  The young men had a great time selling their wares.  They donated all of the monies collected that day to the Andes Fire Department.

Saul Bouquet, age 6, also entered first grade at Andes Central School. He is the son of Brigitte Bouquet and Adam deLange.  His contribution to the stand was a delicious homemade pink lemonade with Hibiscus.  What a refreshing treat on a hot summer day in August! 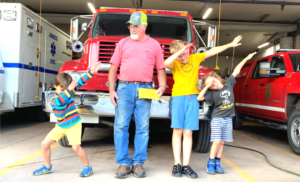 The boys delivered the money to the fire chief of the Andes Fire Department, Dale Tait.  They had a chance to see the fire equipment and speak with the chief.

The Andes Fire Department is very appreciative of the donation.  These three young men are an asset to this community. Thanks Charlie, Leonardo, and Saul!~