In mid June, as the sun shined brightly over our sleepy little hamlet, Cyndi Wright, of Dirty Girl Farm, sat at her computer sending out feelers inquiring about Community Day. By the first week of July a handful of volunteers came together in hope of bringing back the spirit of the Town of Andes annual Community Day celebration that has historically been held on one of the first 2 weekends in August…this year it would take place on August 14.

With only 6 weeks to pull it off, Wright, along with long-time residents Bill Day, John Bouton, Charlotte Yakovleff, as well as Cathy Santoiemma, and Derek Curl got together and divvied up the responsibilities that had to be done. Knowing nothing about how Community Day was organized, Cyndi took charge of vendors, Charlotte rallied volunteers, John, Cathy and Charlotte worked on the parade, Bill tackled random logistics and Derek said he would take care of fireworks. The group had a plan. It might not have been like the past, but they had a plan to make Community Day happen.

A call for parade participants and volunteers was announced…and sure enough, the call was answered. Word had gotten out and people wanted to be a part of it.  Posters were made by Catskill Creative’s owner Peter Ames and local volunteers hung them around the community and neighboring towns. Robyn Ciccone of Dragonfly55 Epicurean Coffee Bar & Boutique worked on the advertising for the County Shopper and Walton Reporter.    Vendors asked what time they should set up. Parade participants sent information about their vehicle(s) or float. A script was written. Placeholders on Gladstone Hollow were hammered in the ground. Directional signs hung up around town…and sure enough, Andes Community Day came together.

Vendors could be found in front of the school and all around Main Street.  Lemonade and ice cream stands scattered here and there for anyone that wanted to beat the heat….while the smell of BBQ from the Andes General Store wafted in the air as far as the wind could carry it. 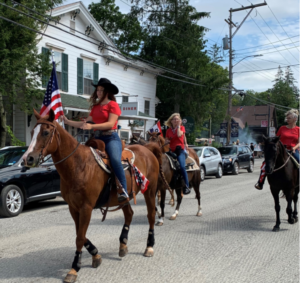 The parade kicked off around 10:30 am. On the balcony of  The Andes Hotel the familiar voices of the long-serving emcees, Ron Guichard and Charlotte, along with Chris Rose, gave a big welcoming cheer as the Delaware County Sheriff’s department lead the way.

Showcased were floats from the Andes Town Pool, Andes Central School and ACS Class of 81, who were celebrating their 40th class reunion. 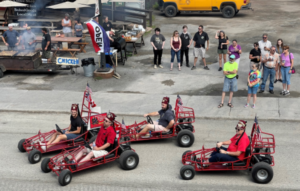 Town Fire Departments/EMS came from Bovina Center, Margaretville, Arena, Fleischmann and Andes.
And of course the day wouldn’t be complete without classic farm equipment, vintage cars and decorated side-by-sides.
During and after the parade people from all walks of life could be seen milling in the streets, checking out shops and greeting each other.

Many made their way to John Mollett’s Willbees for the Anti-Rent War talk and presentation. Other folks enjoyed the old time string band sounds of  The Tremperskill Boys. Lookie-loos circulated at the farmers market. In fact two lucky kittens were adopted and found their fur-ever home. 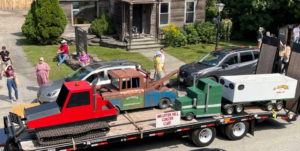 To close out the day’s celebration, a grand display of fireworks could be seen behind the Andes Hotel followed by the soothing jazz sounds of singer/songwriter Spencer Day.

Many don’t know this, but for us Mountaineers, Community Day is about coming home. It’s a chance to meet up with old schoolmates, community friends and neighboring townsfolk. A time to reminisce about the days of growing up on the Mountain, going to ACS, or battling Palmer Hill in the winter. Seeing who could remember their mailbox number AND the code to open it. Telling tales about Noon Hour, the number of kids in your graduating class, and how many times you fell off the tow-rope at Bobcat. Recalling how much a drink cost at Ali’s or  Temming’s Hotel, and who got milk delivered to their house or “What was his name that picked up our trash?”

ardless of the reason we came together on August 14, Community Day is about remembering what Andes is about….it’s a time to reflect on the good memories..and the bad….but most of all,  Andes Community Day is time to make new memories.~