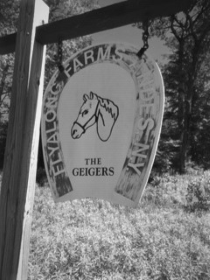 My parents, Clarence and Anne Geiger, bought our farm on the Tremperskill in May of 1961.  It was a different time in Andes. The lawsuits over the construction of the Pepacton Reservoir were still going on and there were over 40 working dairy farms in the Town.

We had horses at the time, my sister Jill’s black Morgan horse named Jet and my father’s palomino, Flyalong, whom we named the farm after. There’s still a pale imitation of him on the “Flyalong Farms” sign at the top of Chapell Road on the Tremperskill where you turn off to our farm.

My father soon became friends with Bob Daily, who owned the Red Gate Pony Farm (which we affectionately renamed the “RG-Puff”). Bob had worked for years with horses, including thoroughbreds at the New York City race tracks, and he was soon giving me jumping lessons at the RG-Puff.  (These were not entirely successful, but I did learn to fall off a horse without severely hurting myself.)

Bob’s main occupation, though, was as the local artificial inseminator, and that was how I really came to know him.  1961, my first summer on the farm in Andes, was also the first year I worked as a swimming instructor at Onteora Scout Reservation, a boy scout camp in Livingston Manor. For my weekly day off, my parents would drive over and take me back to Andes. I would spend the day with Bob, driving around the town in his little red Jeep and watching him work his magic with “the ladies” as he called the local dairy herds.

Bob’s day started each morning at his “office,” also known as the Snack Shop, a small greasy spoon located in the building at 27 Delaware Avenue that now houses the “Atelier Aubergine.” The Snack Shop was presided over by waitress Vern Ford, who introduced me to the Andes specialty of Cakes & Eggs, a stack of pancakes with two fried eggs right on top.  As the last mouthful disappeared she would often ask “would you like another cake?” which came for the same price, as did the endless coffee refills.

Between 6:30 and 8 am every weekday morning, just about every dairyman in Andes showed up at the Snack Shop once his morning milking was over. And that was where they would meet up with Bob and tell him if they needed him to visit.  If one of them didn’t make it in, he would just call the Snack Shop and Vern, Bob’s part time receptionist, would take a message for Bob to make a visit. By the time breakfast was over, Bob had his orders in and his day’s route plotted.

Then it was into the Jeep and uphill and down dale all over the town.  As we drove along, part of the charm was the stories Bob would tell about past roadside disasters – or near disasters, like pumping his brakes as we neared the top of Cabin Hill, and telling me about the time they failed just after he crested it, and how he somehow avoided disaster as he careened all the way down the hill into Andes with no brakes.

Learning about the farms and farmers of Andes was also part of my local education in Bob’s shotgun seat.  And talking to farmers all over town was part of my Andes education, too. If we arrived at a farm and there was no one around, there was always a cow with a piece of baling twine tied around her tail, the signal that she was Bob’s intended “date” for the day. I won’t bore you with an explicit description of Bob’s professional activities.  Suffice it to say they included a long rubber glove and lots of soapy water. By 1962 the bull semen came frozen and had to be stored in a container of dry ice, and then needed to be thawed in a pail of warm water before it could be used. This led to many freeze-burned fingers for Bob.

I’d like to say that my relationship with Bob had a happy ending, but it didn’t.  Unfortunately, Bob had a failed relationship with alcohol. In November of 1962, after Thanksgiving, I took my last ride with him around Andes in his red Jeep. That day he told me and every farmer we talked to that he must have had a wonderful Thanksgiving, because he woke up the next morning with an empty wallet and a terrible hangover. Before Christmas he had committed suicide.  I visit with him now on my trips to the Andes Cemetery. On my most recent visit, since he was a WW II veteran, his grave was decorated with a flag for Memorial Day.~