An invasive species is defined as an organism that is not indigenous, or native to a particular area. They can cause great environmental harm to the new area, although not all non-native species are invasive: some cause no harm and are sometimes beneficial. The very harmful invasive species that is not recognized by most of us is the feral domestic cat. As I write about feral cats and the damage they do, I remind myself that the last time I did, many years ago, a friend, a local cat owner/lover was so outraged that she made a very public de-friending of me. She did not quite want to accept the fact that if a gentle, beloved domestic cat escapes and goes fully feral or is even allowed to roam free part time it can become a major danger to our local song birds and small mammals such as moles, voles, mice and shrews. Why should the loss of these small rodents be of concern? Well, they are the fodder keeping alive our native hawks, owls, foxes and bobcats to name a few of our native predators, and thus the ecosystem of which we are a part. Domestic cats originated in the Middle East approximately 12,000 years ago and have spread all over the world with the help of mankind. Researchers find that 1.3 to 4 billion birds along with 6.3 to 22.3 billion small mammals are killed by feral and free roaming domestic cats each year in the U.S. Government culling is being considered in the Adirondacks where there are huge colonies of feral cats. Please keep in mind that I don’t believe that all this is the fault of our beloved cats; rather it is us and our lack of awareness.

As I write this, we are being besieged by one little creature trying very hard to invade our home. Although I have built more than 40 homes and erected them around our land just for this little critter, this little EDB or Emotionally Disturbed Bluebird, has spent four mornings in a row smashing herself against various windows in our home. She is not pecking at an image of herself as a male robin once did apparently surmising that the image of himself was another male and potential competitor, this little feathered creature is simply emotionally disturbed as there are two bluebird houses within forty yards of our house. Maybe she is desirous of a larger domicile: ours. Having done a little research I found that this behavior is called “thwacking” and should cease after her eggs are laid. Apparently housekeeping and young rearing duties take preference. In the meantime, Nancy has named her “Ladybird”.

Another bird which we have taken note of—or he of us—is a really beautiful male Baltimore oriole, 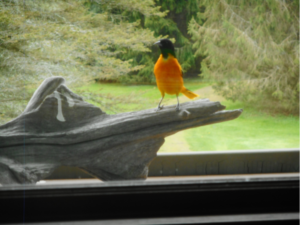 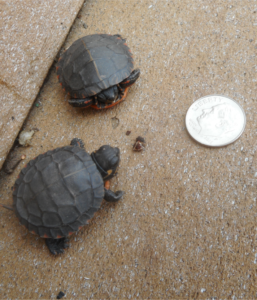 and now that Ladybird has taken to her family duties, he has taken to hanging around, but not attacking—just apparently admiring the reflection of himself. He now also has left for apparently more important avian activity.

On a rather sad note, Nancy informed me that she had just run over a newly hatched turtle. These little guys are about as big as a quarter and almost impossible to see as they match the color of the driveway. Sadly, this little guy survived underground the whole winter, scratched himself out of the ground on a finally warm day only to meet his almost immediate demise. On a positive note, I reminded Nancy that we caught and safely put into one of the ponds almost a dozen of these newly hatched little critters last year.

Back on the subject of invasive species. It was written in the Adirondack Explorer that when addressing this issue, in order to see the most invasive species and the largest distributor of other invasives all we need to do is to look in a mirror. As Pogo the comic strip character said back in the fifties; “We have met the enemy and he is us”.~