Handfeeding a few pretty brazen chickadees I have taken note that once their beak is full they then launch off in search of an appropriate tree branch to land on and disect the sunflower seed. It can be a struggle for the little guy on a curvy branch for he has to hold it down, peck it open and maintain balance all at the same time. 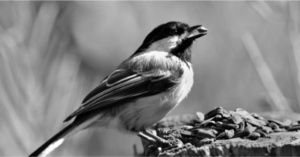 If the frustration is too great, he will be off to find a tree branch with a groove in which to secure it and then proceed with the de-shelling process, that is, if the groove is an appropriately groovy groove. If not, off again in search. I had one that had the audacity to always grab two seeds at once, quite a beak-full for a chickadee.

As I write this on March 12, we are having our birdfeeder’s cover being ripped off, resulting in the unknown culprit being very well fed. At first, we both thought it to be a gray squirrel, but then realized it was happening overnight, which means the culprit is nocturnal and more than likely either a racoon or possibly an opossum with the racoon being the most likely. Presently the plan is to attach a cam in an adjacent tree and see what we come up with.

OK, Nancy with great effort got a cam up in the right place, which, in less than a one overnight hang, resulted in 2,862 shots of a swinging birdfeeder. The cam is set off by motion and the feeder hangs by a wire line from a tree branch and because of a very windy, blustery night this deluge of swinging feeder shots. They did include some very poor shots of the primary suspect which was a racoon that after two tries got the cover off and then jumped into the feeder and feasted on the—one might say—well-earned, sunflower seed. Nancy took the feeder down the next day knowing the critter would be back every night it would be up. It is my job now to make the cover racoon-proof.

Of course, problem raccoons are one problem for bird feeders, but the more renowned is of course Macwa. And how I love that name. Black bears are out and about now and are very hungry, making them more adventurous and hence problematic for us feeders of the avian world. The reality of it all is when we put out food for one species nature ignores any restrictions on who it is set out for and all wild critters are there to take advantage of free sustenance. I have not seen a bear nor sign of one or a feeder take-down so far this Spring (I am writing this on April 1), leaving much time for an encounter or two. I am certain that eventually there will be one or two posing for one of my trail cams. DEC statistics say there are anywhere between six and eight thousand black bears in the state, 50 – 60 % in the Adirondack region and 30 – 35% in our Catskill region. In our hunting region (4P) there were 34 bears taken by hunters, 24 taken in the early season in September, 18 taken in our Andes Township. The DEC says that bears are both intelligent and curious, and I wonder if like our ubiquitous friends, the coyotes, that under hunting and other pressures their fertility rate increases. This begs the question: Will we now see more sows with 3, 4, 5, cubs? Anyone who knows me, and knows I am a little nuts, knows that I hope so.

I have not noted a single bald eagle up by the nest on the Dingle Hill bluff on Route 30 in the past two months. But, there is very good news on bald eagles in general. The US-wide population has grown fourfold in the past decade according to the US Fish and Wildlife Service. Speaking of eagles, I was delighted to read in NY Outdoor News about a Baldy in Oneida County that was captured on trail cam feeding along with two others, that was wearing a band that was placed on it in June 1995 as a nestling. Eagles can live up to 40 years according to the NYDEC.

Two notable quotes that caught my eye; “Kids today can tell the difference between an apple and a coke, but not a maple from an oak.” “They are better at IDing corporate logos than native plants and animals.” My six-year-old friend River excepted. ~