For many years, besides fighting and extinguishing fires, the Andes Fire Department has provided Rescue Service. This would include:  motor vehicle accident extrication, water rescue, ice rescue, rope rescue and other dire situations people might unfortunately find themselves in. To accomplish these tasks, the fire department has maintained a Rescue Truck. The following are some examples of the equipment carried on this apparatus:  Battery powered and gas powered jaws of life.  Numerous types of rope to lift or lower a firefighter or victim. Cold water suits and rescue equipment to remove someone who has fallen through the ice.  Wet suits and safety gear to rescue individuals who may have fallen into the water, especially the reservoir.  Gas meters to detect deadly levels of the silent killer, carbon monoxide. Thermal imaging cameras to locate downed victims in a building full of smoke.  Equipment to clean and fight a chimney fire. This truck also carries numerous walkie-talkies, flags, cones, flashlights and signs to assist in traffic control at an emergency scene.

annual motor vehicle inspection, several cracks and severe metal deterioration were found on the frame. The truck was declared unsafe and had to be immediately taken out of service.  With limited financial resources available, the commissioners and the chief discussed options to quickly find a replacement vehicle.  During the month of December, Chief Dale Tait along with other members of the department extensively researched used rescue trucks that would suit the department’s needs and fit in the firehouse. After numerous inquiries and many phone calls, a used truck that was suitable and within the budget was located in Lee, Illinois. The commissioners gave the chief the green light to purchase the truck.  So on an early January morning, a committee comprised of Chief Tait, 1st Assistant Chief John Ruchar, Commissioner Carl Beers, and Department Treasurer Dave Johnson left by car to begin the 16 hour ride to Lee, Illinois.  After checking the truck over, test driving it, and some further negotiations, the truck was purchased. The crew returned two days later at 3 am with the new (used) rescue truck.  It is a 2000 International chassis with a Superior brand rescue body. 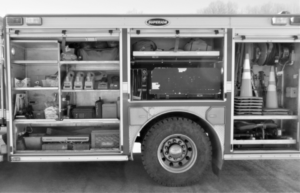 Fire department members, coordinated by Chief Tait, worked for several weeks constructing shelves, designing brackets and mounting equipment. The truck has a small pump and carries 400 gallons of water.  Some minor work needed to be done to the pump along with the installation of fire department communication radios and the truck lettered. The truck was wired to accept drop down chains to assist traction on slippery roads. The chains from the old rescue truck were removed and installed on the new truck.  Once the majority of this work was completed, the truck was placed in service in mid-February. Hopefully this truck will serve the firefighters and residents of Andes well.

Residents are reminded that the fire department is always seeking new members.  If you are interested and willing to put in the time to attend training, stop by the firehouse any Tuesday evening.~