It all started with daffodils, a septic and leach field. The west side of our house is dominated by our septic and leach field and was just a mown, flat area when we got the property.  We knew that we could not plant any trees or sizeable shrubs there and were timid about digging beds. However, we realized we could put in some spring bulbs and daffodils that are so classic, reliable and beautiful.  Even then, I knew that the daffodil foliage needed to be left until it was entirely ugly before it could be cut back.  Consequently we planted them in a spiral so that we could mow between them and create some sort of interest in that area rather than just letting the grass “go” until late June.  We started this in 2003 and added many daffodils over the years. Unfortunately, as they kind of moved themselves around, it became harder to make the spiral look right.

Around 2014 the lovely muse (AKA Peggy) started asking the grumpy gardener (me) to turn it into a really nice “spiral” garden since the mown spiral was getting a little messy and the rest of the garden was outclassing it.  The very busy grumpy gardener resisted for a year, but the seed was planted and I decided to tackle this project with the Zone4 crew in 2016.  It just so happens that during the winter of 2015/2016 we were invited to have our garden on the Garden Conservancy’s Open Days Garden Tour which was a huge honor and a fantasy fulfilled.  That really put the pressure on to have something done and looking good by July. 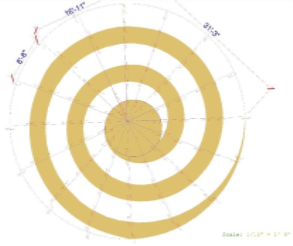 It was exciting to create the design.  I wanted it to fit into a perfect circle centered on the house with a diameter roughly the same as the width of the house and I wanted it to be planted primarily with masses of native grasses and perennials.  I decided the path part of the spiral should be my beloved pea gravel, of course.  However, I quickly discovered the complexities of a spiral!  One would think that with my logic and computer skills I would be able to easily construct the spiral of my dreams.  Boy, was I surprised!  Spirals are very complex: There are many types and most of them don’t fit into a perfect circle.  Eventually, I gave up on doing it mathematically and found something close to what I wanted on Google Images. Then I just traced it in my computer program (AutoCAD) that I use for design and tweaked it to get what I wanted.

The next step was to order the plants. Landscape plugs was the obvious choice, because I was going to need about 600 plants to fill in the approximately 750 square feet of planting space and make it lush. Landscape plugs come in trays of 32 to 72 and are mostly intended for the nursery trade to “grow out” plants to sell, but landscapers often use them to do large plantings. They are great and I often use them. By the time I started ordering, however, much of what I wanted was not available (this happens often unfortunately).  Since I had to have this done by the time of the garden tour I had to take some second choices. 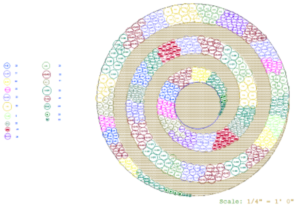 As soon as the snow melted, we started on the implementation. First, we drew out the circle using a stake, a string and a can of spray paint (our usual approach to a circle). Then we made lines from the center point to the circumference in 8 feet intervals or so, and marked every point (128 of them) where the spiral touched the spoke-like lines. That is hard to understand, but it was really the only way to mark out the crazy geometry for the spiral. It would be impossible to eyeball!  It was laborious, but after we had the points, we connected the dots to create the outlines of the spiral. Then with a straight shovel we cut through the sod along the lines. Next, we removed the sod, which we did with our backhoe. That made a mess and required us to re-mark the lines several times to repair the tractor damage as we went, which was still a lot easier than lifting the sod manually. Finally, we placed the soil and gravel into their appropriate lanes. 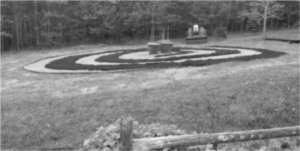 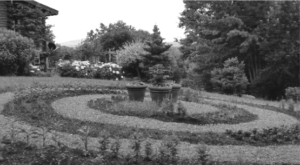 All and all, the spiral garden has been quite successful, and visitors seem to enjoy it.  It even became the promo photo for the next year’s West Kortright Garden Tour. The photos do not really do it justice in black and white as it is very lush. A few of the initial plant choices did not work out, which is to be expected, and I have added others, including some clumps here and there of the red “Jacob Kline” bee balm, drumhead allium and Lauren’s grape poppies throughout. These additions kind of glue together all of the different larger masses of different varieties. There were a couple of mistakes with my plant choices, as a few of the grasses grew taller than I expected and ended up flopping a lot, which makes for a lot of cutting back to keep the paths accessible. 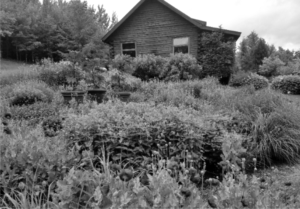 I could go on and on about the learning experiences and evolution of this garden and how it is a petri dish case for the challenges of any garden and, um, well life.