Being a bit of an avid birder, but no expert, I had what I thought to be an exciting and very unusual sighting, something even my ardent Audubon friends would be very interested in. It occurred on a bright sunny day in early February while pacing on our back porch, primarily to get some much-needed exercise and at the same time keeping an eye on the birdfeeder which had a lot of activity due to the fact that it just had its supply of sunflower seed replenished. There were the usual suspects: bluejays, chickadees, dark eyed juncos and the very outstanding male cardinal. I took note of what appeared to be a bird high in a cherry tree close by that looked like and had the coloration of a robin: This was impossible as they were all now supposedly deeply ensconced in the deep south. Also possible was the female side of the pair of cardinals, but this bird was unusually high in the tree for that species. I slowed my gait (not that it was fast anyway) just not to spook the bird. If it turned out to be a robin, I was sure it would make a headline in Audubon News considering the time of year. And now, being in close enough position to make a definite identification—a beautiful oak leaf! It did not make the Audubon News, but I am proud, and somewhat embarrassed to announce it in the Andes Gazette, another one of those not-so-fond memories, I guess. 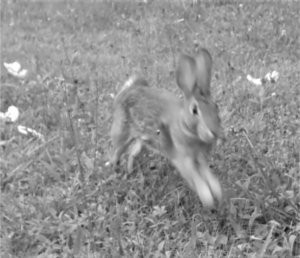 Recently I have been reading about anxiety, and is it a product of age and how we decompress? Much is written about the use of mindfulness and mediation to resolve these mental quirks. I am told that there are what are called apps that can be installed in your smartphone that you can use to relieve anxiety and other mental maladies. I, on the other hand, sans smartphone, believe much decompression can be garnered through enjoyment of the natural world which at times can be like a theater where one is part of the cast amongst all the wild critters on stage. Sometimes for Nancy and me observing from our kitchen window is like having a balcony seat in that delightful theatre. One never knows what the next act might be and who will be performing. The actors on our stage are encouraged by donations Nancy and I put out of birdseed and bread scraps, with the result of very low-cost theater. At times the play can be made up of rather repetitive acts, the same actors doing the same old thing, but now and then an actor or actress will do something odd and unexpected as when one decides to attack another. Usually this occurs when one inadvertently gets too close to another, an unwritten proximity rule being broken. 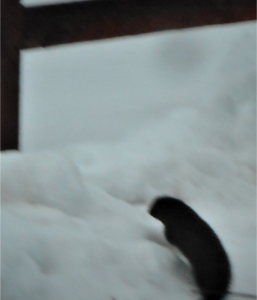 I must say that recently my good wife Nancy has become the most successful spotter of varied wildlife. Of course she is also the most efficient feeder of same, tossing the occasional meat scrap primarily for the ever-present crows. Although it was not the result of the dishing out of table scraps that attracted it, although it was Nancy who spotted it, a bobcat brazenly made an afternoon appearance on a bright sunny day, February 26. It crossed a large field and then disappeared into some low brush which we consider rabbitat. I am making a brazen guess that it was a very hungry cat. Rabbits, there were three locals recently and only one is now being seen. Two weeks later Nancy captured on camera a handsome mink doing a few runs on our back driveway. Sadly, the photo was not of the caliber required for the Gazette. The predators have been out and about and are hungry. My own one great observation again, from inside the house, was a barred owl out one afternoon flying tree to tree. This is quite unusual as the owls tend to be nocturnal. By the time I retrieved my binoculars he was gone. We also have a small flock (six) of tom turkeys that make an irregular showing to take part in the overflow at the bird feeder.

My friend Ann has seen bluebirds a couple of times in early March which I thought unusual, but they were in lower elevations than that of our vantage point. And speaking of March, your bluebird houses should be cleaned out by now. Finally, if when doing the cleaning you come upon one inhabited by field mice or another critter, you have to make a moral decision: evict or install another bluebird house nearby. I suggest the latter.~