To my taste we have been having a lovely winter.  Lots of beautiful snow cover with nice freshening flurries to keep it clean. And we have had fairly consistent temperatures. This is good for the plants and much better than having -20 degrees one day and +50 two days later, which sadly has happened often in recent years. The only downside to a generous snow cover is the darn deer! It encourages them to come exploring for delicious evergreens to munch on.  Even though I fiercely sprayed deer repellent in December, there has been a lot of annoying activity in my garden.  Arrrrggggghh!

Last month I wrote about the value of small shrubs as garden elements and explored shrubs that were naturally compact and can thrive in our area of the Catskills. A while back, the nursery industry and horticulturists recognized the need for more compact shrubs for home landscapes and have been introducing new options ever since. Many have arrived in the last two decades while I have been an active professional and paying attention!

I have not used lilacs in my designs very often over the years for a few reasons: They really don’t look like much when they aren’t in bloom; they don’t bloom for very long; and they get big and gangly.  Before everyone gets upset, I love them in the right context and in big spaces. 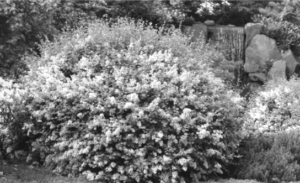 Recently, however, I have been using a lot of compact or dwarf lilacs because they have a nice full habit for structure, and they bloom later and a little longer. Miss Kim has been around for a while and is the largest of the bunch. It can get to be 6 by 6 but it is not so crazy up here in our cold climate; Miss Kim also enjoys a nice haircut. I love Palibin and Bloomerang which are a little smaller and very compact. Bloomerang supposedly reblooms (hence the cute name), especially if you deadhead it, but as far as I am concerned the jury is still out on that as a real benefit.

It is impossible to avoid my beloved and belabored hydrangeas when having this discussion. So many great compact hydrangeas have become available over the last decade.  It was so welcome, too, as pruning standard Hydrangea paniculatas to control their size has problems over time, creating spindly branches and an odd shape. There are dwarf versions of my two favorite panicle hydrangeas: Limelight and Quickfire. 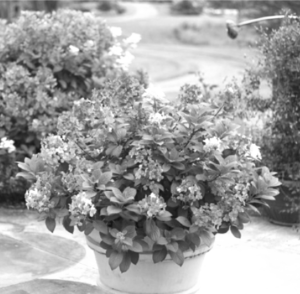 Little Lime and Little Quick Fire have the charming characteristics of the originals but stay within the 4-to-6-foot range and do well with a little pruning to keep them even smaller.  Little Lime has greenish flowers that then fade to white and eventually to that dusky pink. Little Quickfire blooms earlier than the others, starting out with pink-edged flowers that only get darker over the season. My current favorite dwarf hydrangea is Bobo. Cute name and great plant. I have had one for years in a prominent spot in my garden that is no more than 3 and a half feet tall and wide and now I use them all of the time in my clients’ gardens. Last month I talked about the Annabelle hydrangea. But I would be remiss if I didn’t mention the very diminutive version:  Invincibelle Wee White, that was recently introduced.  It supposedly only gets 30 inches tall and wide. I planted some last year for the first time, so I will let you know how I like it. 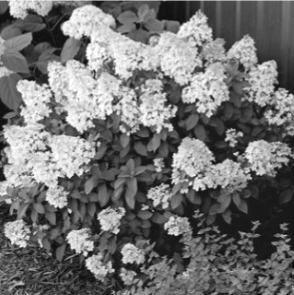 There are numerous other dwarf hydrangeas around, but the ones I mentioned are the ones I see generally available and they are all great.

Another group of shrubs that are very useful are the dwarf ninebarks, reaching only 3 to 4 feet tall and wide, if that. The first one to come out was the Little Devil which was the dwarf version of the original Physocarpus opulifolius “Diablo.”  It has a very dark oxblood foliage which is great to add color to the garden.  Unfortunately, as much as I love this shrub, it has started to show the evil mildew that some of the ninebark cultivars acquire. There is now a dwarf version of the mildew-resistant (so far “fingers crossed”) Summer Wine called Tiny Wine. It has nice burgundy foliage as well and they are very attractive little shrubs. Just recently introduced is the Tiny Wine Gold which has chartreuse foliage (Yay!).  All of these ninebarks have white to pinkish flowers in late May and June. The variety called Amber Jubilee grows a little bigger than the others, but it has fantastic yellows, reds, oranges, and purples in its leaves. It is a great addition to your garden. While doing some research for this column I came across Physocarpus opulifolius “Nanus,” which is a simple green Ninebark that only gets 2 feet tall.  I know it is very geeky, but I got super excited about this find and I can’t wait to try it.

There are many smaller, more compact shrubs out there that I could talk about.  If you are interested you should check out “dwarf weigelas”, “dwarf deutzia” and “dwarf cornus sericea.” I haven’t even touched on conifers or broadleaf evergreens like boxwood, for instance. Let me reiterate how useful these shrubs are in the landscape. They can be used as accents in beds with perennials without overwhelming them: they can be used for short hedges or edges; they can be used under windows to keep from blocking the view; they can be used in front of larger shrubs to hide legginess; and the list can go on and on. 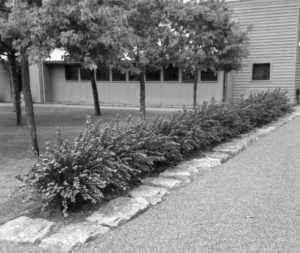 In addition, most of the shrubs I have mentioned are not going to break the bank and you can buy them in the smallest containers available because they will grow quickly.