And of course, some not so fond. The best are those that are fond. But some not so fond keep the balance and the fond more precious. Take my memorable incidents that occurred back in my surfing days: One was when I was joined by a friendly porpoise when surfing a lonely beach down in Peru, unforgettable and quite fond. Forgettable was surfing with my buddy off the coast of Mazatlán, Mexico. It was in the evening, waves not spectacular, but very enjoyable until the two of us were surrounded by sharks. At least they appeared to be sharks circling around us with exposed dorsal fins. We made our way into shore with hands necessarily in the water to propel our way toward the shore. When we got in there were two local dudes laughing at us. They explained that what surrounded us were not sharks, but curious and playful rooster fish. Safe, but embarrassing indeed. We and those two locals eventually became great friends, fond memory.

Another that was both frightening and embarrassing was surfing really big waves at Sunset beach on the North shore of Oahu, Hawaii using a neighbor’s long board which was necessary for the really big waves. 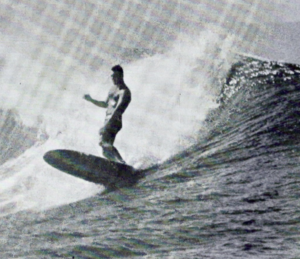 The waves were twenty feet and you really had to know what you were doing. I didn’t. Down I went on a big one and after leaning back into the wave lost footing. The wave sucked me up and off the board and down under I went. Rolling around under water and bouncing off large coral heads was a bit unnerving. And finally coming up for a gulp of air only to find two feet of salty foam made for tough breathing. Finally after finding some kind of equilibrium another wave comes crashing down on you again. Rather unnerving to say the least! You’re supposed to stay where the waves are breaking as the theory is that they will eventually push you onto the shore. Great theory, but not if you have already drowned or nearly drowned. I laboriously swam in against the current, arriving at the beach so exhausted I could barely drag myself up, only to be greeted by a busload of gazing tourists. I was then told that my borrowed surfboard had floated back out all the way, meaning that now I had to swim back out and retrieve it. I did, whole experience not a fond memory.

Although it was many years ago this was more local and I think I may have written about it in the past. It does remain a very vivid memory, both fond and at the time kind of scary. It has to do with the three F’s: Freeze, Fight or Flight; the first word Freeze is rarely thought of when a situation occurs which brings about Fight or Flight as the only alternatives for survival, but the Freeze nanosecond is crucial and is when the decision of which of the final two is undertaken. The incident:  I observed from our kitchen window a very large bobcat working a just-hayed field in broad daylight hunting for the many disturbed, panicking and injured rodents that result from haying or brush hogging. 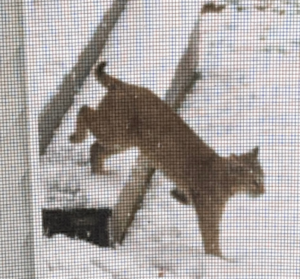 He was heading toward a corner that gave me an opportunity to run down unseen by him and install myself in a brushy clump to be within fifteen feet of his route. Upon his arrival he spotted me. The bobcat stood up tall, froze as we locked eyes for a nanosecond and then he was gone. That 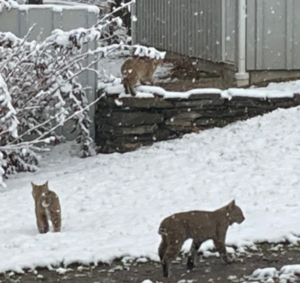 Freeze moment, as short as it is, is where what can be a life-or-death decision for the creatures involved is made to choose either Fight or Flight. A very tough decision in a fraction of a second that I was not the one to make. Just a fond memory for me, but probably not for the bobcat.

A very local and recent incident which I know will be remembered fondly was the day that crazy grouse, the EDG, was spotted by Nancy pacing back and forth at our door on this past Christmas morning obviously looking for a handout. He got his gift, not wrapped or in a stocking, just a few handfuls of black oil sunflower seeds, almost more than he could eat, but he did. The beginning of a great Christmas day with a friend, no masks required. By the way this will be the fifth year of this ongoing friendship. 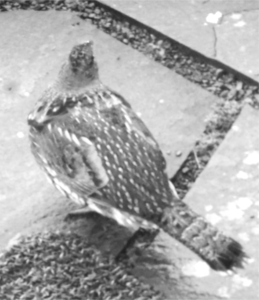 I have no idea how old he was when he first showed up, so his actual age is not known, but what I do know is how happy we are to have his friendship. Someday I guess he will be just another fond memory added to my list.

On August 5, 1837 upon reaching the peak of Mt. Marcy, the tallest mountain in the Adirondacks, John Cheney stated, “It makes a man feel what it is to have all creation placed beneath his feet.” This thought brings back many fond memories for me.~