COZYING UP TO GEORGE WASHINGTON — MARCH 2021

Did you know that George Washington had little schooling and no college? That deficit of formal education bothered him throughout his life but didn’t prevent him from writing beautifully, reading widely and having a highly developed and curious mind. Did you know that his mother, Mary Washington, a life-long complainer and apparently a malignant narcissist through and through, never showed an iota of pride in her son’s accomplishments during his 8 years as commander in chief of the Continental Army? Did you know that he had a full blown crush on Sally Fairfax, the wife of a friend, before he wooed and married Martha Custis and may have nurtured those passionate feelings quietly for years after? Despite having no biological children, did you know that he raised a houseful of them, including Martha Custis’ two, and unofficially adopted two grand-children, in addition to mentoring young men such as the Marquis de Lafayette, who became like a loving son to him? That among his pioneering farm work at Mt. Vernon such as discovering crop rotation of a rich variety of plantings as an alternative for soil depleted by tobacco cultivation, he is also known for the development of the American mule? 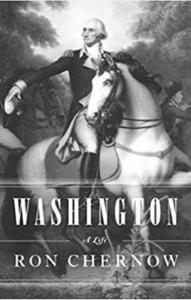 I have been reading Washington: A Life by Ron Chernow, over Presidents week (borrowed from our library). Even though I haven’t fallen crazy in love with him like I did for Alexander Hamilton, while reading Chernow’s biography of that marvel of a man, I’ve certainly grown in my knowledge (previously bare-boned) of Washington. And one can’t follow the arc of his life without feeling awe, respect and liking for this outstanding man, the same feelings he, in his understated way, evoked in most of his associates and the populace in general. He was a matchless gift to us at the crucial time of our country’s initiation.  Without his special qualities, vision and perseverance when leading the poorly funded, ragtag Continental Army and then as the first president of the young nation we might not have survived as a strong country. I heartily recommend this book to any American. The wonderfully crafted account just flows along, so that you effortlessly absorb the narrative of his life along with all the interesting particulars of battles, political intrigues and the cultural and economic realities of the times.

If you want to have a closer look at the complexities of his personality and the facets of his split views on the issue of slavery, I can only say: Read this book!~