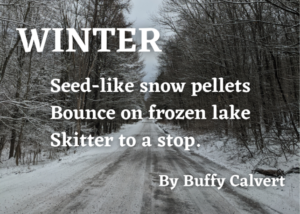 This Winter has given me an abundance of exercise from sweeping snow, and most likely there will be more to come, but the third week of January was particularly unusual.

When we first moved here, I was surprised to be hearing about lake effect snow. When cold arctic air blows across the Great Lakes before the lakes freeze for the winter, it picks up moisture from the open waters and deposits it as snow once it reaches land. I was familiar with it because of relatives in Cleveland, on the shore of Lake Erie, but we aren’t anywhere near the lakes!

Watching the weather radar when it happens, you can see how the blue that indicates snow starts on the southeast side of Lake Ontario and does indeed travel diagonally across New York State to end here in Andes and Bovina. No farther. It probably ends here because Mt. Pisgah, where Bobcat is, is the western-most of the Catskill high peaks (over 3,000 ft).

Lake effect snow is common in late Fall and early Winter, but not the third week of January, and it was relentless. I love snow, especially the light fluffy sparkling kind that lake effect brings, but I became exhausted from clearing it. Every–Single–Day. All week. Twice on Wednesday!

There was, however, another perk besides exercise for being outside every day that week. I love to observe footprints in the fresh snow to try to figure out what the resident wildlife has been up to. That week started out with the usual large rabbit living under the gazebo, a smaller one by the barn (and now under the shed), and the deer crossing midway down the driveway (I am tempted to put up a “deer crossing” sign just for fun). About midweek, as the weather worsened, two big changes happened.

One was that the large rabbit ran, and was followed by cat-like prints, slightly larger than a cat’s. A neighbor had said they had seen a fisher, and we had spotted a beautiful young fox out in the meadow. Looking up the footprints online, it could have been either one. Neither the cat-like prints nor those of the large rabbit has been seen since.

The other change was that the deer prints started going right up to our bedroom window, where the lower branches of a large arborvitae were soon eaten away. We have never before seen any sign of deer coming anywhere near the house, so I figured it must be slim pickings for food out there this year. A bush that I had been thinking about cutting down was eaten, so that decision was made for me. When they started eating the rhododendrons, I finally trudged through the deep snow to tie mesh bags full of Irish Spring soap onto the branches as a deer repellent. It works. 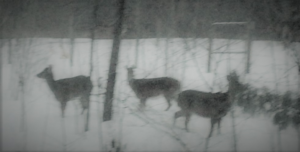 Spring slowly approaches. I am sure all the critters out there will be glad to see this Winter end. It seems to have been a rough one for them. I know my chickens will be happy not to be all cooped up as they’ve been because of the snow. I will be in good shape for doing mud season chores, having done so much physical work all winter.

For now, it’s time for me to start folding newspaper to make pots to start seeds for my gardens. You can find the directions on YouTube under “DIY: Newspaper Pots for Seed Starting/Cuttings”.~