We have a great hill for sledding on our property. It’s long and steep, and really fun to slide down. The problem is, of course, getting back up to the top again!

The hill on our long driveway is fortunately less steep, but it is still pretty steep and not fun to slide down. Where the driveway meets the road, there is a sharp drop on the other side of the road. As far as I know, no one has ever gone over the edge, but just the thought that it might be possible makes my heart race! What’s worse, because this actually has happened, is not being able to get up the driveway at all once it becomes icy. 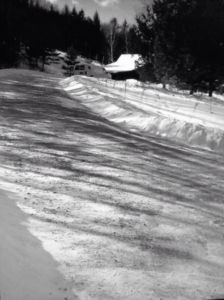 The first couple of Winters that we lived here were very cold and snowy, so I was happy to leave the clearing of the driveway to neighbors with plows. I quickly learned the two main problems of having a gravel driveway plowed. One is the inevitable heavy piles of gravel that form and need to be moved in the Spring, along with whatever gravel has strayed onto the lawn. The other is that the plows tend to leave some layers of snow behind. These layers tend to compress and build up, forming ice.

I also quickly discovered that cleaning the gravel walkways is much more easily and thoroughly done with a broom rather than a shovel, especially with the light powdery snow that we most often get. I use a regular household broom, not a push broom. I find using a push broom to be hard on my back, whereas a side-to-side motion with a regular broom actually helps loosen up those muscles.

I started extending my sweeping to include the driveway. At first it was just the very light snowfalls that the plows never bothered with anyway, but now I handle most snows. With somewhat deeper snow or heavy wet snow, I shovel off the top and then finish what remains with sweeping. It was when alternating between the shovel and the broom the first time I worked my way down the driveway in a thicker snow that I realized the sweeping helped my back muscles. When there’s a very deep snow I call for a plow – I’m not totally crazy!

In the beginning of my sweeping adventures some people acted as if I really was crazy for doing something outside the ordinary. Years of our driveway usually being pretty clear has at least quieted down my biggest early critic—my husband. However, he still loves to tease me, telling me that I should try out for the Olympic curling team.

I have no athletic ambition. I’m just happy to be healthy enough to make whatever “sweeping changes” at home that I can!~