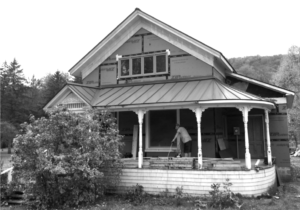 Who hasn’t passed the ongoing project on Lower Main Street, three houses beyond the Triangle as you walk or drive to the Post Office, and wondered, “What in the world is going on here?” Leo Koenig, at the request of the Gazette, shared some details of this demanding endeavor he so boldly ventured to take on. (Many of our readers know this as the Balcom house, later owned by Maya and Albion Butters, who, after moving back to Europe, rented it to Clark and Seema Shah-Nelson followed by Dan Friend.) For several years the house had been empty and desolate.

Leo, recognized out in the world as a premier art dealer, is better known in Andes for the Community Day art auctions to benefit the Michelle MacNaught Memorial Fund held in the big white barn behind his house at 160 Main formerly owned by Walter and Mary Sprague. Already a known entity in the art world, a man in his late twenties when he arrived, he was recognizable, often bicycling along Route 28, by his very tall and lanky frame. He had come to Andes in 2006, bought 160 Main, renovated it while living there, and quickly grew to love our town, connecting with people at church and in our eateries. He immediately felt at home, enjoying the respite of being here when not traveling for his galleries. Most recently he had a gallery in Chelsea, in Manhattan and then one in Bushwick, Brooklyn. The realization solidified that Andes was the place, as he put it, that “I’d like to set some roots in and make my stable home—where I feel most at home.” After Martha Campbell, next door, passed away in 2010, he bought the house at 176 Main. He oversaw a gut renovation and realized the huge garage, from which Mr. Campbell had sold cars, would, with modifications, be suitable for art storage. Between the two side-by-side houses he has been able to host artists, friends and family. So, the big question: Why acquire another house? 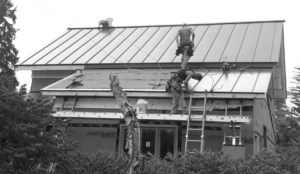 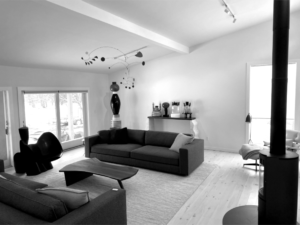 Leo tells how he would sit on the front porch of the former Redden house on Lower Main Street with a friend, and appreciate the generous spacing between houses, the low traffic, and well cared for properties, particularly admiring the curved front porch across the way at 311.  When an auction sign popped up, he realized he could make an inexpensive purchase in the neighborhood—deep standing water in the basement and extensive black mold notwithstanding. He had fallen in love with that rounded porch and the property’s location. He would retain the shell while dealing with its multiple problems, figuring out the details as he went along. A self-declared impulsive decision maker, Leo offered a successful bid, and the property was his. It could serve to house an overflow of friends and family. In particular, his mother, who lives in Germany, could perhaps have this house to stay in when visiting.

How to mitigate the serious standing water situation? He had various engineering acquaintances assess this disaster situation. The solution arrived at was to pour tons and tons of concrete, until only a crawl space of 2½‘ of the 6’ basement remained, meanwhile allowing the underground spring to flow through and off to the stream. Other work on the house proceeded at a slow pace. 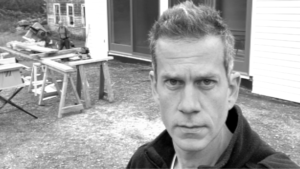 Leo Koenig with Billy deSanto in the background.

Then, on March 10th, while up here, Leo saw the world and much of his business come to a halt. (His gallery in Brooklyn had very recently shut down, and he was only in the planning stages of opening a gallery on 958 Madison Avenue between 75th & 76th Streets in Manhattan.) He sat down with Billy deSanto, who had worked on this as well as his other houses, and said, “Why don’t we go all out on this—you, me and Rob deOude (a gallery staff member who had recently purchased the former Marty Donnelly insurance building on Main Street)?” Leo clearly exults in having made this choice, a fit for the times, which enabled this working group to form their own little bubble, out there on the job from 7:30 to 2:30 daily. It gave him a role and provided a beautiful way of getting through the pandemic. He was able to bestow such focused attention on the project that he developed a special fondness for this house, in this setting. “The details are gorgeous,” he declares. In fact, Leo, girlfriend Jennifer Lyu and her five-year-old son, Max, plan to move in very soon!

P.S. Work on re-building the back barn and landscaping will proceed in the Spring.~