It looks like another season for focusing on our homes and gardens unless something surprising happens quickly. Last year was a big year for nurseries and garden centers from what I observed, and I heard anecdotally. I suspect that when the pandemic is in our rearview mirror, many people are going to lust to travel and spend money going back out into the world. However, it seems that we are in for another Spring and Summer of folks enjoying their own surroundings and working on their gardens. So, let’s make the most of it. 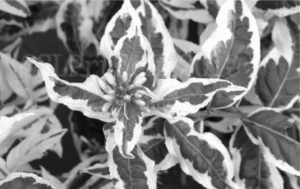 Shrubs are a huge asset in the garden. They take up more space than perennials, generally require less care, provide structure, beautiful foliage, and many offer flowers. There are numerous examples of beautiful gardens populated primarily with shrubs and trees. And why not? They provide a huge amount of variety and interest. The challenge with shrubs, however, can be their size. This is a topic I have touched on many times over the years, but have never given it enough attention. Landscape designers and gardeners have long struggled to find shrubs that are right-sized for smaller gardens and for circumstances that require shorter specimens. Think about how many situations you have seen where shrubs have outgrown their space and grown up to block windows, or are hacked to death to keep them from blocking views.  This is particularly prevalent in foundation plantings, but it can be seen in all sorts of scenarios, and it happens to everyone. It has happened to me more times that I want to admit, but I think I am getting better at it. 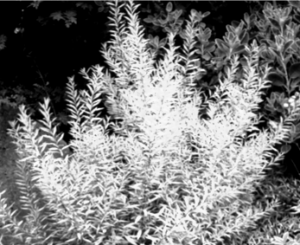 Over the past years, the nursery trade has delivered many more dwarf versions of favorite shrubs that really shine in the garden. And I have sought out shrubs that are naturally more diminutive and experimented with shrubs whose size can be successfully controlled with pruning.

Let’s start with naturally shorter shrubs:  I am going to give hydrangeas “short shrift” here (pun intended) since I have written so much about hydrangeas recently.  However, the Annabelle Hydrangea (Hydrangea aborescens “Annabelle”) is a great shrub that grows only 3 to 5 feet high, and since I cut them back to the ground every Spring mine never get taller than 3 feet. Potentillas do not get very big, either, and they are easily controlled with my power hedge clippers, which I use every Spring just to keep them from getting gangly.  Potentillas are not the most attractive shrubs to my taste, but I do like the white ones. They can have quite dense flowering, which is simple and attractive, and they are one of the only shrubs I know that have a long bloom time. They will continue to bloom for most of the season and they are native.

Another genus of short shrubs that I am very fond of are referred to as bush honeysuckles (Diervilla).  There are many cool species of this genus, but they are all about the foliage, bearing pleasant, but small, somewhat insignificant flowers. The northern bush honeysuckle, southern bush honeysuckle and mountain bush honeysuckle run from 2 feet to 5 feet tall and all take very well to pruning.   The northern (Diervilla lonicera) is the shortest and has nice copper-tinged foliage, but it is an aggressive spreader, so don’t put it where it will overrun its neighbors. The southern version (sessilifolia) has a wonderful, variegated cultivar called “Cool Splash” that I love.  It is a little tender for our cold Winters, but in a slightly protected spot it can thrive. There is a beautiful “Cool Splash” in front of the old Two Old Tarts that I planted when they first opened, and it is still doing great. The “mountain” bush honeysuckle (rivularis) can get taller than the others, especially in warmer climates, but comes in dramatic colors from orange to almost black. These are beautiful and dramatic additions to the landscape and are quite hardy.

While I am not a fan of most spireas, there are a few species that are short and require mentioning.  Numerous Japanese spireas (Spirea japonica) fit the bill, such as “Magic Carpet” with coppery leaves and “Goldmound” with shockingly chartreuse leaves, both with pink flowers. There are other simpler cultivars in this species with white flowers and green foliage, but note that all of the japonicas are very aggressive “reseeders” and on the invasive species list in warmer climates. A couple of native spireas to our area that do not get too big, but are not great for key spots in the garden include meadowsweet (Spirea alba), and steeplebush or hardhack (Spirea tomentosum), both of which I love in natural settings but many consider to be “weeds”.  Of course, my favorite and the only spirea that I plant is the Spirea “Ogon” which is unlike any other. It has beautiful thread leaf golden foliage and also qualifies as a short shrub, although it can grow to be 4 feet tall in protected areas. Like all the spireas mentioned, it can take a hard pruning, with no ill effects.

I will continue this “short” discussion shortly.