The effort to get the usually shy and suspicious denizens of our forests to show up and pose for a picture can take effort, some knowledge of where they might show up, and of course a full dose of good luck. I place my trail cams at the corner of ponds or real wet areas and also wildlife trail junctures, as likely points of rendezvous. I also put out nutritious table scraps to bait the largely unseen critters such as bobcats, fishers and mink. Another that I have never got on camera is the weasel, either in brown or winter white phase. Of course, all these species are out there going about their daily business of hunting, finding and retaining territory and, for the females, the challenge of raising their young. It is always with great anticipation that I put the SD card into the computer to see what has been caught on the candid camera. Some critters largely ignore the flash when caught at night whereas others show great alarm with their eyes registering the full reflected light, staring at this bewildering intrusion into their nightly expedition.

One of the things that I find very interesting is when a prey species such as a cottontail rabbit makes an appearance and sometimes in as little as ten minutes goes by before a major predator like a fox, coyote or even a bobcat appears, and crosses the exact same spot with what seems to be no awareness of the rabbit having been there such a short time ago. You would think that there would be lingering scent catching their attention. But who knows? Maybe they are faking unawareness in order to surprise the bunny.

There can be some very interesting surprises, such as when I was capturing some great shots a number of years ago of a sow bear with her three cubs. On a bright, sun shiny morning she apparently took great umbrage with the intruding camera and decided to give it a bite, offering me an unusual shot of the interior of her mouth.  The camera survived the assault, and she had no cavities. 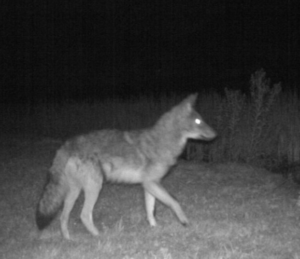 Then there are the times when the results of what was thought to be a great location for a cam results in an exasperating end. An example of this was when I, new at the hobby, set up at ground level on a trail high on our hill where there were a number of porcupine dens. I thought I might get a shot of a porky or maybe some other critter at his or her eye level. It was early Spring and I let the cam remain unchecked for about a week. Upon finally checking the SD card in the computer, surprise! I had about four or five thousand shots of a waving fern frond. It is motion that sets off the cam. It being the Spring of the year, ferns pop up and wave in the breeze. No critters caught on that set-up. I now try to remove all vegetation that might move upon the slightest breeze; lesson learned.

This past Fall I got a number of queries from friends about when is it time to put out their bird feeders without worrying about them being taken down by a bear. A difficult question to answer and luck not always my companion. I am hesitant to give a particular date, as when I do, often just after that date bear takedown occurs. Biologists feel that it is not the cold, but the lack of food, that entices them to den. Our black bears do not hibernate, but go into what is known as a shallow torpor with a 10-degree decrease in body temperature where the bear’s metabolism and heart rate slow down. It doesn’t need to eat, drink or pass waste. Fat in the bear’s body breaks down into water and calories for the body to use. On occasion a bear will wake up mid-Winter and take a stroll. I witnessed this once a million years ago on a February snowshoe hike on our hill. There were the bear tracks, but I did not see him. Now I did call it a “him” as it is my assumption that a sow having or nursing cubs would not venture out. 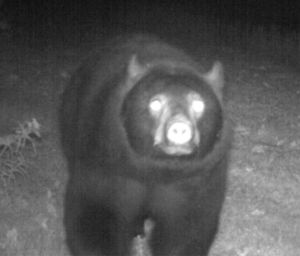 A really great and insightful naming,  by our friend Rich, down the road, an avid birder and lexicologist: He decided that a barred owl residing in some woods close to where he lives down in the Big Apple shall henceforth be named Shakespeare, and the spelling of barred owl should be changed to Bard owl.  Ingenius, Rich!~