I drag myself out of my sleeping bag to pee. It is minus 0.4 degrees outside. Above me, the Southern Hemisphere stars are all dust and terror and distance and slow fire in the night, and I stare up, frozen, and frozen in wonderment.

This passage from Helen Macdonald’s new book Vesper Flights recalls the spell her best-selling H Is for Hawk cast with the magical, vertiginous quality of its prose. Vesper Flights is another sort of book, however. Rather than telling a single story that unfolds through time, it puts together brief meditations on the author’s experiences of nature, meditations that succeed one another like objects on a strange necklace—of stones and shells and claws and bones, planets, dried flowers and things without a name. If there’s a feature that unites these pieces, it’s surprise. You never know what the next experience will be. Sometimes one follows logically from another—a piece on being an immigrant comes after one on bird migration—but sometimes you just don’t know what hit you. 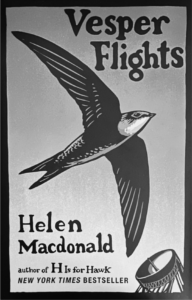 My grasp on the chapter from which the passage I quoted came, is still shaky, even though I read it twice. Suddenly we’re set down in one of the planet’s weirder spots, Chile’s Altacama Desert, a place of nine-mile dried-up salt lakes, liquid lakes that are turquoise or the color of blood, volcanoes live and extinct, places where one is in danger of being buried by avalanches, getting a bad sunburn, or freezing to death. The author is accompanying Nathalie Cabrol, head of the Carl Sagan Center at the SETI Institute; we never learn what the initials stand for, but we’re told it’s “a nonprofit organization based in Mountain View, California, that seeks to explore, understand and explain the origin of life in the universe.” It turns out that this means studying the geological features of an area of earth that resembles Mars as it was two and a half billion years ago, before solar winds had wiped away its atmosphere and dried up its oceans, and before UVA rays had killed off almost everything that was left alive. The theory is that some life went underground or underwater (which had also gone underground), and that rocks from Mars containing microscopic life may have collided with earth, bringing with them the beginnings of life on this planet. Or vice versa. Sound far out? It did to me. But not any further out than the actual high plains where the sample collecting takes place.

There are no conclusions to be drawn here, just one jaw-dropping vista after another—some physical, some metaphysical. The author is an adventurer who craves new sights and sounds, new temperatures and atmospheres; she likes to get her feet wet and her hands dirty while on the track of something wild—either a theory, as in this case, or a creature, as in most of the other chapters.

Some of the chapters are very short, so short that the ending comes as a surprise. “What?” I’d say to myself, turning the page to find the chapter was over. Apparently the point had escaped me. But the next thing I knew I’d been transported to some other marsh or hilltop or gorge, feeling the cold, the wind, the rain, hearing the sound of a bird call heard nowhere else, the whoosh of wings. Sometimes it’s foolish to insist that such experiences have a point. Just being there is all. Just being there.

Macdonald knows how to value—and how to convey—present moment, up-close, physical and emotional sensations. Nor does she wait until the sun is shining and the temperature warm to go in search of rare bird species or to spend interludes in out-of-the-way places. She’ll go for a walk in the middle of night. Sit in a “hide” for two hours without seeing a single squirrel. Her thirst for first-hand encounters with the natural world pushes her out of her comfort zone continually.  I began imagining that some inner tumult, some unsolved life puzzle, might be driving her to look for the other part of herself in the out-of-doors.

Whatever the reason behind them, her adventures in nature often lead to speculations on the human predicament as reflected in the non-human one. And a recognition of the way our lives impinge on the lives of birds and foxes and rabbits and trees, their fate being sealed even as we are looking on. “Increasingly,” she writes, “knowing your surroundings, recognizing the species of animals and plants around you, means opening yourself to constant grief.” She makes us feel it. As, for instance, when we learn of the impending loss of all the ash trees in North America. But grief does not take over. Wonderment returns.

Vesper Flights is not a warm and fuzzy read. The author, both self-disclosing and self-protective, wants your attention, but will not pander to you in any way. (In the end, I had to read a novel by Elizabeth Berg to right my inner balance.) But her book teaches you a lot; it’s painstakingly honest, closely observed, brilliantly worded, occasionally ecstatic, and most of the time good company. It left me with a deepened awareness of how rich, complicated, intense—and ephemeral—the life around us is.~