First and foremost, “Happy New Year!” May 2021 be a year of recovery. Deer season is now over and there are a good number of survivors, both deer and their hunters.

The corn gift story began on November 25. On that morning Nancy stepped outside to our porch where she saw three whole kernels of corn on the arm of one of the wicker chairs. This was a mystery, as there is no known source of corn kernels in and about or near our home. I henceforth took a picture of the chair with the kernels displayed and sent it via computer to a number of friends who might endeavor to suggest answers to the mystery of who or what gifted the kernels and the reason why. The replies were varied, funny, thoughtful and a couple in alignment with my own thinking. Some of them follow: Bigfoot, Unitarians, Space Aliens, Unknown Thanksgiving gift, and the nicest, “A bird expressing gratitude for years of feeding,” along with the admonition, “Don’t look a gift bird in the beak!” and finally the following due to my career in law enforcement with which I fully concur: a bluejay bringing a gift to let me know of illegal activity going on such as baiting for deer with corn. The bluejay was what we used to call a snitch. As of this writing neither I nor any of the responders has truly cracked the corn case! 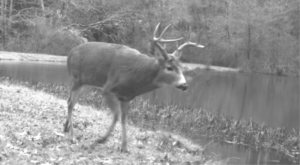 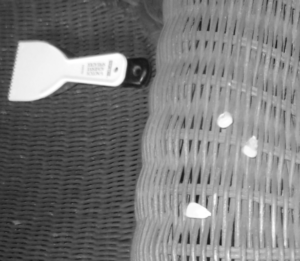 Back in November I was intrigued by the story of the unplanned trip of the saw whet owl to Rockefeller Center, purportedly riding high within the Norway spruce being trucked from where it was cut in Oneonta.  The feathered stowaway caught by a worker has now been named Rockefeller and is cared for by a rehabilitator and will be released somewhere in the wild. I thought it would be nice if it were returned somewhere near its point of origin, Oneonta. An Audubon friend felt strongly that it did not arrive via the tree, but was probably roosting in Central Park when it decided to continue to migrate south. That led to me picturing it heading south down Park Avenue between tall buildings, then spotting this cozy-looking large Norway spruce in which he decided to take temporary refuge, but then was spotted and caught by a workman. There were many comments generated about the saw whet and birding in general in Central Park, many written and some apparently by tweet, some of which stated openly that publicizing the location of “sensitive” species and the use of owl hoot recordings to entice the birds into the open was not ethical.  After all the back and forth was said and done in an article in the NY Times ended the conversation with “Maybe the hoot is mightier than the tweet.”

Back to the goings on in Andes. Another few days after opening of deer season I spotted from our living room window a real nice 8-point buck meandering across a field and cutting a corner to a trail that would lead eventually down to what we call the Upper Pond, this exactly at noon on a bright sunny day. I found this unusual: a buck traveling in broad daylight in the middle of the day with gun season in full swing. He should have been hunkered down, but with the rut also in full swing, the search for a receptive doe does for him take precedence. Taking a look at the pictures on the trail cam assigned to the Upper Pond the next day, there he was at 12:15, strutting along in all his glory with apparent bravado. I wished him well and haven’t seen him since, and am now hoping that for his safety others, and especially the hunters, see him not.

And finally, the corn kernels on the arm of the chair eventually disappeared. What critter got them we do not know. Whether a mouse, a squirrel or Bigfoot, I wish him well as well.

Connecting to the great outdoors and the wild critters out there may just be the ideal for those of who are fearful and staying indoors.~