The building, including the storefront shop “Paisleys” (called Paisley’s Country Gallery when John Gregg was the proprietor, generously naming it after his daughter) has been sold, and I am bidding it a fond and bittersweet goodbye. After John’s passing in early 2018 I continued to run the shop that he started in 1987 and that we ran together since 1998.

So in a way I phased out gently. It was necessary to sell the property to settle John’s estate, but it was also time for me to pass the baton on to an owner with a fresh vision. Kimberly Bevan, a lovely and accomplished young woman, is an Interior Designer moving from New York City where she has been based since 2010. With a love for fabrics and a background in textiles, she says was naturally drawn to the special pieces in the store. The 1870s architecture and original apothecary shelves inspired her as well, having worked on historical preservation projects during her time in graduate school. She looks forward to living on Main Street and joining the Andes community. Kimberly envisions having a “design studio with fabrics for window treatments, pillows and other bespoke home furnishings,” while continuing to work for a national company that specializes in resort design.

As a store patron in the early 1990s I had been a fan of the merchandise of “The Basket Store” as it was locally referred to. I enjoyed the huge spread John put out at his annual Worst Day of the Year Sale on Presidents’ Weekend as well as being charmed by his funky postcards addressing “buckararoo.” When I joined him in the store (and in life) I had no experience as a retailer, having been variously a real estate broker, child welfare caseworker, and in my distant past, a researcher in the civil rights housing field, and a securities analyst. But I immediately took to working in the store, as well as accompanying John to Street Fairs. We ran a weekly booth at the Woodstock Saturday Market, and I tended the store on Sundays while John set up at High Falls, an upscale market that drew patrons along the Hudson, many of whom later found our Andes shop. John would also do week-long County Fairs (I  joined him some days and many evenings in Walton), and special events like the Garlic Festival in Saugerties, the Black Onion Festival in Orange County and, of course, the Belleayre Ski Center Festival on Columbus Day Weekend.

We would regularly attend the Gift Show at the Javits Center in NYC as well as traveling to smaller regional shows in Boston and Albany (once in Mexico City as we were vacationing there). It was fun to peruse miles of merchandise and to have the opportunity to meet the owners of companies from all over the country. Tom Yesberger, owner of Baskets of Cambodia, located in the state of Washington, with production in Siem Riep, Cambodia, impressed us as a savvy businessman who did well by his employees while offering great price points. The baskets, hampers and shoulder bags, handmade from local grasses, were beautiful, fair trade products of high quality and durability, made by local craftspeople in Cambodia who were paid well and were offered educational opportunities and design credits. We continued with this line up to the present. We would visit warehouses of sources in New Hampshire, Massachusetts and Manhattan where we had longstanding relationships with the owners. John also had the proclivity of nudging his way into warehouses, uncovering unexpected finds, handpicking baskets, and hauling away closeouts in his van. As John lost some steam, and also with the goal of economizing on time and expenditure, I urged him to cut down on these outings. In our last years we realized we didn’t need to go to the large shows as we had dozens of tried and true sources, with Internet sites to examine along with the catalogs that remained John’s preferred go-to. While we traveled overseas annually for the entire month of March, and imported from Bali, Indonesia and to a lesser extent from Turkey, our travels were mostly for pleasure and exploration. Of course we prowled the markets and souks to examine the wares, buying things for ourselves and as gifts. But, contrary to what some customers may have assumed, we didn’t travel every year to each country whose merchandise was represented in the store! Back when John was an importer of ethnic goods from around the world in the 1960s and 1970s and distributing to boutiques throughout the country, that made sense. For a little retail store in an era of plentiful importers on the scene with whom we knew how to make beneficial deals, it no longer did. 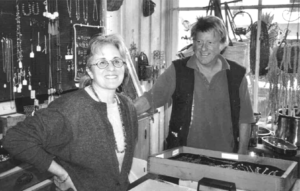 There has always been something special about having a storefront shop in Andes, and living above that shop (the world’s shortest commute, I used to declare). Yes, it was fun to hear the response of people who had stumbled in while conducting a pit stop for food and rest room at Vinnie’s/Cassie’s/Woody’s/Rosalino’s next door, surprised to find the kind of goods we carried and at such affordable prices. It was even more gratifying to welcome in people whom we greeted regularly over the years, sharing laughs and conversation along with the sales. One woman would come annually from Deposit with her teenage kids and load up with presents; a number of people made our store a mandatory stop when heading on their annual pilgrimage to the Glimmerglass Opera. Second home owners and their house guests, and young children (some of whom now come in with children of their own!) would include Paisleys on their rounds for shopping for home décor, kitchenware, a summer sundress, and, of course, baskets. I have known by name and felt fondness for so many people over the years, in some cases having shared our family stories and intimate concerns. And it was always a kick to see fun interactions and new connections taking place among the store patrons. Groups of women would often transform an afternoon shopping excursion into an extended entertainment.

I’ve been warmed by the kindness and consideration of our customers, and I’ve been astounded by their interesting backgrounds and depth of knowledge, their wide travel experience. And the one-time visitors! How people from France, Germany, the U.K., Holland, Greece, Australia, New Zealand, Eastern Europe, Southeast Asia, Japan, various countries in Africa and South America have found their way to Andes I have no idea. I’ve heard more than a dozen languages being spoken by patrons. So often I felt the world had come to us, just as we were hoping to bring through our offering a bit of the world to our customers. My horizons and knowledge were broadened by these encounters since in our intimate, slow-paced store there was usually time for relaxed conversation and the exchange of information.

A whole range of people, knowing I am closing, tell me with heartfelt sincerity how much having the store here has meant to them—their homes full of our merchandise as evidence—and how very sad they will be to see it go. I am truly touched by their declarations. As an attestation to the comfort level of being a merchant here, I can state that I don’t think a single thing has ever disappeared from the store (once a man was so busily engaged in conversation with his accompanying family that he walked out with a dress he’d hoped to show his wife still draped on his shoulder. He scurried back in, mortified, and we all had a laugh.) Which meant that there was no monitoring on behalf of us storekeepers of try-ons, no cause for vigilance or suspicion, just freedom to enjoy the social portion of the transactions.

Early on I made it my mission to create a clothing boutique in one of the back rooms, where a group of spirited women would occasionally stage a group try-on. One day I noticed a man entering the store with a clear view of the bra-clad gals. Soon after I acquired a wicker screen to do duty as a try-on corner.

Along with being a merchant goes involvement in the smaller and larger community. A host of organizations would come to us for donations for their auctions. I was on the various iterations of an Andes Chamber of Commerce through the years: ABC, Andes Main Street, the Chamber with George Calvert. And of course John and I participated in the Streetscape Project of 2009. John was a member of the Zoning Board of Appeals; I on the Library Board, the ASHC board, the Andes Gazette staff, and a facilitator of the Italian Circle. I substitute taught at the Andes School and continue to attend their plays and participate in their activities. People are still nostalgic for Meatloaf, the black and white Bassett hound, our cats, our February Presidents’ Weekend food extravaganza, and various close-out pottery and folk rugs that no longer exist. Especially they miss John.

Believe me when I say I am overwhelmed with nostalgia as well. But I see a new generation with innovative ideas, talents and energy taking root in Andes and that infuses me with a surge of positivity. Let’s all focus on the blessings and serendipities the future will bring!~