What is the recipe for infusing a long-running, well managed historic society with new energy and expertise?  In the case of the Andes Society for History and Culture, it appears that a collaboration between Linda Dunne Egner, recruited to the board 2 years ago, and Joanne Kosuda-Warner, on for the past year, is the ticket. Linda and Joanne are friends and both, with husbands and daughters, Andes second home owners going way back. Also both recently retired, with youthful energy and time to spare, especially in the era of COVID-19 when most social and travel plans have collapsed. They invited me to meet with them at the Tavern to talk over some of the ideas they had and progress already made. It didn’t take long to realize that they are the story!

Linda had a long career of museum administration in New York: 20 years at the Cooper-Hewitt National Design Museum (part of the Smithsonian, and one of my favorites to visit) where she was deputy director, 10 years at the American Folk Art Museum and 4 years at the Rubin Museum. A part-time resident on the Tremperskill since 1986, and full-timer for the last 3 years, Linda is enthusiastic about the ASHC and all aspects of its mission. Partnering with Joanne—they started with a thorough cleaning and cleaning out of the Tavern, a job not fun when done alone, but apparently a diverting activity when accomplished as a team—they have created a twice-weekly stint of work and exploration at the Tavern that has fully engaged them both. Joanne, living part-time in the hamlet for 23 years, was curator of the historic wallpaper collection at the Cooper-Hewitt Design Museum for 11 years, followed by another NYC career. She is the author of Landscape & Wallpaper, a gorgeous book that I happen to own. People may remember the well-received local Andes wallpaper exhibit she curated at the Tavern several years ago. When I voiced my hope of seeing a renewal of this exhibit, the women explained that reviving portions of many past exhibits is one of their goals. So is showcasing objects from our local weaving and dairy history.

Some of their focus has gone to re-imagining the exhibit space on the second floor so that there can be an upgrade of the permanent Anti-Rent War Exhibit with better flow and lighting. Also more wall and floor placard explanations of the collection being exhibited. The women advocated providing special highlighting in the Tap Room of certain acquisitions such as an old deed from Janet Montgomery recently acquired. The Tap Room, Joanne believes, would be the perfect setting in which to make the local Anti-Rent War history come alive to visitors.

They expressed appreciation of Jim Andrews’ recordkeeping of archive acquisitions over the years, and have devoted special time to clearing out the detritus that necessarily accumulates in a catch-all space, a process which affords giving a fresh eye to organizing what remains. While deep in the archives they were able to identify objects worthy of future exhibit. They gave their attention to the Parthenia Davis Gift Shop as well, and put out the possibility of adding small furniture to the offerings. 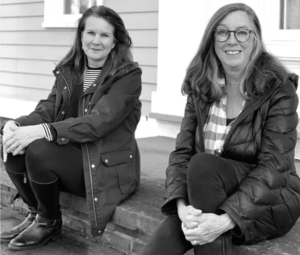 Joanne and Linda fully recognize the fine stewardship the Society has provided to its three historic buildings—the others being the Old Fire House and the Pleasant Valley Meeting House along with its annex dining hall—but are also cognizant of work needed on these buildings, some of it being urgent. Next will be a focus on desirable further enhancements, such as restoring/upgrading the upstairs of the Fire Hall. A new computer was recently purchased. Other foreseen changes are a totally re-configured website and increased programming, including programs that would take advantage of the sense of intimacy and marvelous acoustics at the Pleasant Valley former church building. The upcoming letter community members will be receiving in early December will outline the needs and dreams identified by the board of directors. Current board president, Margaret Moshier, has spearheaded the enormous work done at the Thrift Shop, which is the generator of a majority of the revenue needed for maintaining the buildings; Jim Andrews, whose main responsibility through the years has been the collection, is without doubt the unofficial historian of Andes. Linda and Joanne look forward to more of his walking tours, as do I. Every board member plays a significant role. The passing of Harold Haugeto, Treasurer, leaves a gap in that arena, which he performed so well.

If anyone new to Andes is reading this, keep in mind that Joanne and Linda also hope to recruit people as museum guides. So much has fallen to board members over the years, and it is their ardent hope to involve many more people in the community in active roles. Look for the letter, and stay tuned for more information in the pages of the Gazette!~