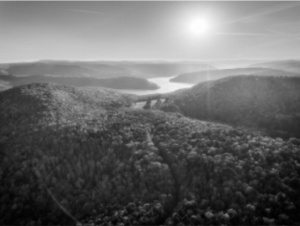 I wanted what was, to stay in the now, but it changed with each second, making it all the more precious with the certainty of its passing. I can’t imagine living in a place that did not have 4 seasons and the heightened feelings of arrival and departure.

Another twilight hosting my 7 mile stroll out the reservoir road. Quite acceptable I thought, the ratio of 6 cars passing to 5 flocks of geese during the walk. I saw a Red Shouldered Hawk being harassed by a Crow, a White Breasted Nuthatch singing while tapping away at one tree after another. A Black Throated Blue Warbler landed on a rock ledge near me as I walked through the notch. It hung out for awhile as I shared stories. I walked out into the cemetery where I saw what turned out to be a flock of 40+ Pine Siskins—don’t remember seeing them this time of year.

Pleased to see that the mother raccoon with all 3 of her “children” had survived the past number of months, and were still traveling as a unit foraging along the road.

Woolly Bears were rumbling along everywhere on their appointed rounds while the blue streaks of Jays rocketed by. The area of road along the cemetery was a killing field of the Woolly Bears. I guess that was a glass half full, for I don’t remember seeing this many Woolly Bears. The fact that there were so many dead on such a lightly traveled road spoke of their numbers this year.
Rounding the bend beyond the cemetery I was greeted with great sadness to see the resident porcupine of the curve had been run over. He has been there just about every evening for the past few years—since he was just coming out of babyhood and the size of a fat kitten. It was not a good death. He dragged his intestines and stomach in a 6 foot crescent before expiring in the middle of the road. I mixed in this discovery with my silent gazing of multi-colored trees set

amidst rock ledges in the golden twilight beneath shifting blue Autumn skies. Love, Gratitude, Presence, Bewilderment. A universe of light accompanied by the incomprehensible.~