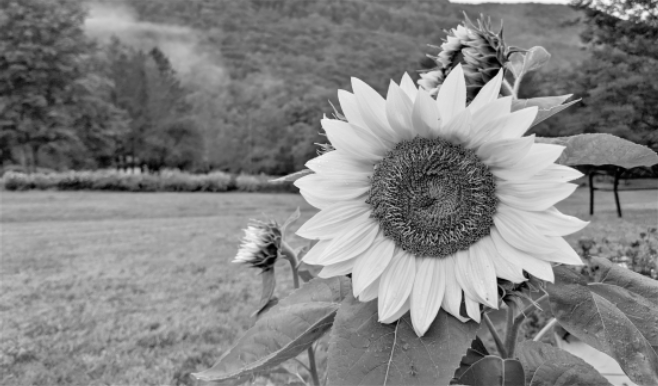 I knew the sunflower seeds were ripe when the bluejays arrived. And all summer I had heard many gardeners complain about chipmunks. One columnist even declared this “the Year of the Chipmunk.” Although I knew they could very well have been one of the contributors to my battle with hole-makers in my garden this summer, I hadn’t seen any around since spring. Since my dog Xena HATES and goes after chipmunks above all other critters, I had hoped that she had managed to make their lives miserable enough that they had gone elsewhere.

I had been busy making the sign for the library fundraiser. [An aside – Please catch the “library fever” and make a donation today. We need your help more than ever this year! A heartfelt thank you to all those who have donated already.] The morning I was finishing up and delivering the sign had been chilly, so I had happily put off my gardening chores until the afternoon when it was warmer and sunny, much more pleasant.

The first thing I saw when entering the garden was a bed of carrots that were a total mess. Some smaller ones were dug up but not eaten. Odd. Most invading critters love to eat the carrots, or at least the greens, and don’t just dig around them. Then I saw the bowl-shaped areas in the dirt next to the partially eaten stringbean vines. My chickens happen to adore eating string beans and string bean plants, and they make those bowl-shaped depressions all over my yard in sunny spots to give themselves dust baths. I’m told the dust baths are important to rid themselves of bugs, excess oils, and whatever poop or mud may have gotten onto their feathers.

Chicken damage. It just so happened that one of the older chickens had not come into the coop to roost the night before. Could she somehow have managed to get into the garden and then couldn’t figure out how to get out again? One of the funnier quirks of chickens is that they will go through even an opened gate and not be able to figure out how to go back the same way. Every year I have to teach the new batch of chickens how to find their way back to their coop yard. They will just run around the outside of the fence in a panic until I repeatedly lead them back in. They do catch on to the idea eventually, thank goodness.

Looking for the rust-colored shape of the chicken that had been missing, I spotted one of the young white ones running through the raspberry plants. “Wait a minute!” I thought, confused, because SHE had definitely been in the coop, the six bright white ones being very easy to count in the dusk. Then I saw her run through a basketball-sized hole UNDER THE FENCE !!! Who could have done THAT !!!

When I saw the chipmunk run down the stem of a nearby sunflower and through the giant hole, behind the chicken, it all clicked into place. Steve had told me that Xena had been outside for a very long time that morning, he didn’t know where. She must have seen the chipmunk feasting on the sunflower seeds and gone nuts to get to it. And the chickens followed behind.

I gave a deep sigh and got to work filling in the hole, cutting off the sunflower heads to put out far away from the garden, and repairing what chicken damage I could. I only grow sunflowers for the birds to eat, and because I love the way they look. You can be sure that in the future I will cut them down as soon as the bluejays arrive!~