I am writing this in the middle of August which is perhaps my least favorite time or year in the garden (I know, what a curmudgeon!). Nature and the garden are still awesome, but this is the point where there is not much blooming (phlox and black-eyed Susans aside.) Some things are starting to brown out in the heat, the Japanese beetle damage is glaring and things are flopping all over the place.  I am so ready to cut everything down and move on to Fall.  Wah wah wah! So, I find year after year that this is when I want to write about cutting things back or watering or just to whine.  Thank goodness for the glorious hydrangeas. They are shining now and will continue to adorn the garden until next Spring.  I can’t believe that I have never written about them before. I had to go back and look to make sure, since I was struggling for a topic and can’t believe my good fortune.  I can write about hydrangeas!! 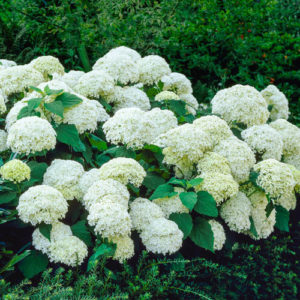 I love hydrangeas. and there is a lot to love; there are so many species and cultivars and quite a few of them will thrive in Andes. The one I am going to talk about today is actually considered a Catskill native, although I have never seen it in nature, nor has anyone else that I have ever asked.  The Hydrangea arborescens, or smooth hydrangea, has numerous other common names but most folks know it as the Annabelle hydrangea which has been the most prevalent cultivar for years.  I use this plant in nearly every garden I create.  It is the first hydrangea to bloom in our area, mid to late June, and continues looking great until the Fall.  I leave them up all Winter to enjoy the papery light tan foliage and dried flower heads. The Annabelle hydrangea has a rounded dense white flower with a greenish tint when it first blooms, but is basically white and makes a nice cut flower.   I cut them back to about 12 to 18 inches in the early Spring to keep them from getting leggy and to have large flowers. But there are different thoughts on this.  Some folks say that they get too floppy but I don’t find that to be a big problem. When they flop, I just cut off the stems that are leaning and often put them in a vase.  This hydrangea is very common in the Catskills and my wife associates it with plantings around old farmhouses, along with daylilies and daffodils. 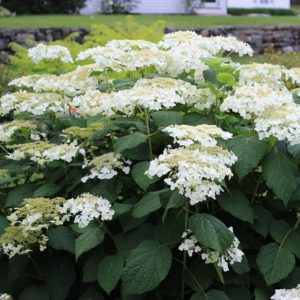 There are so many new cultivars out these days that sometimes it is hard to find the “tried and true” Annabelle. The Incrediball is a cultivar that is touted to have stronger branches and bigger flower heads than the Annabelle, but the jury is still out on that as far as I am concerned. However, the nurseries are favoring it. Invincebelle Spirit is a pink blooming variety of the Annabelle that just doesn’t do it for me. The pink looks tired and drab even when the bloom is fresh, and I have just never seen the plant look especially vigorous, though some folks love it. There is a whole line of Invincebelle® hydrangeas which I have not explored; I am waiting for other folks to try them for me!

There is another arborescent that has a very different look, Haas Halo. It has a flat flower head with panicles around the edges, more like the lace cap varieties. It is quite nice looking and some people like it because it is less floppy, but it has never appealed to me. I have, however, accidentally planted a couple when they came from the nursery in a batch of Annabelles and were mislabeled.  In those cases, I decided to enjoy them as an oddity.  There is one more important hydrangea in the Annabelle family that I have to mention: Invincebelle Wee White. This cultivar has a blush color but only reaches 30 inches in height and a similar spread. There is a lot of interest in dwarf shrubs these days because they are very useful in the garden. They are generally less trouble than perennials and can work in small spaces. I just planted a bunch of these dwarfs in an installation.

There are many other genuses of hydrangeas to explore including the blue ones that everybody seems to want, even though they will mostly break your heart in our cold climate. There are also lace caps, oak leaf and panicle hydrangeas that I will discuss next month.