Back in the day the field for my Field Notes would have been the wide and wild Atlantic Ocean, as one of my great joys was not only surfing, but deep-sea fishing for sharks, marlin and tuna. Some really fond and salty memories last to this day. Did you know there is a shark right here in Andes on Bussey Hollow Road? It is a small mako shark that my wife Nancy 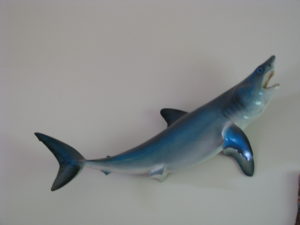 caught and we had mounted. It has been on the wall since day one. By the way if you like to eat fish, and have the opportunity to have mako, go for it! You will never order swordfish again if mako is available. It was always our target species, not only because of its deliciousness, but also the really spectacular fight they put up. Once hooked they can leap 15 feet in the air on one side of the boat, and within seconds be leaping up 15 on the other side of the boat. And I’m talking about a fish going up to 250 lbs. (the largest we ever caught) and they can go over 500. If a second mako was hooked up on a day trip we would tag and release it. The tags were issued by the Littoral Society based in New Jersey at the time. Each was a very small dart with a piece of bright yellow tubing with an ID# and the Society address, asking the person catching the tagged fish to return it with as much information about the fish as possible, such as weight, length and location where caught.

One of the interesting tag returns I got was on a note from the National Oceanic & Atmospheric Administration or NOAA, stating that a female dusky shark weighing 100 lbs. and 5ft. long that I caught, tagged and released on 8/7/84, location 24 miles south of Fire Island, was recaptured on 10/29/95 weighing 386 lbs. and 13ft., 31 miles N/W of El Cuyo, Yucatan, Mexico. In eleven years of ocean meandering that little shark lady gained some weight and length! There was another dusky we tagged and released off Long Island that wound up caught off the coast of Brazil. Another great shark-tagging story was when my son Kris, then working for the NYS DEC fisheries unit, was sent along with others from various coastal State Fishery units to be trained in offshore and inland fish identification at NOAA in Rhode Island. The class included many pictures of various species on a large screen along with details about the particular species. At one point there was a shot of a 400-500 lb. blue shark with the instructor giving some species detail and then moving to the next slide. Kris raised his hand, asked if he could go back to the blue shark, which he did. Now Kris stated “I know that shark!” There was instant bewilderment in the class, including the instructor. “That shark was caught, tagged and released on a Wednesday by my father and me and it was caught on the following Saturday during a tournament, brought into Freeport L.I. where it was weighed winning the tournament and $8,000. It had our tag in it and also 54 pups. Upon checking the detail sheet for the slide, the instructor stated, “You are absolutely right.” Incredible, but true!

One other memorable offshore moment was when Kris, at the time about a ten-year-old, and I were way out and into the crystal-clear water of the Gulf Stream. We spotted a pod of surfacing and spouting whales and we immediately headed in their direction for a closer look. Upon approach I realized with alarm that I had stupidly gone a little too far and was now within the moving pod. A fifty-foot whale suddenly approached the boat directly and then dove, and as it passed safely below it rolled on its side and with an eye the size of a basketball stared up at us, forging eye contact between two hapless members of humankind and a huge ocean creature that could have destroyed us in a moment. We were on his turf! I later learned that this was not uncommon, as whales, like other species, can be very inquisitive when there is something odd in their world. It is termed spying by whale watchers.

Now a brief return to our Andes fields: The rogue Macwa or black bear continues his rampage on our bird boxes on our upper fields. We do not know if it is a boar or a sow with cubs teaching them of a potential food source. Doesn’t matter: bird houses down, Macwa fed— the natural world in full operation. The cottontail rabbits have slowed their pre-sex ritual of jumping over each other. There are plenty of young ones around now and this has not gone unnoticed by a young trim coyote making, in full daylight, hunting expeditions around our house and barn.

As I read with great appreciation Jane Tompkins’ review of “The Wild Places” by Robert Macfarlane I was reminded of the term “attunement” highlighted in another book she recommended, “Surfing with Sartre” by Aaron James. The term defines a similar thread in both:  the very lucky ability to recognize and tune into the natural world around us. Jane, I have ordered “The Wild Places” a must read for me, thanks much!~