It was overheard on the streets of our beloved Andes, a comment from a Brooklyn hipster: “We are now really up in the boondocks.” I personally would not take this as a degrading comment about our Andes environs, but it shows city dweller naiveté as to the incredible natural and beautiful environment in which we are so lucky to dwell. Let them call it what they will, pound the city pavement (I did), come and replenish their sanity. All are welcome here to enjoy, use and help keep our woodlands clean and vibrant.

You never know what you might encounter out there in the wild. An example: Nancy and I were driving back from Margaretville one day when we encountered a bobcat running (safely) across Route 30 just past the Dingle Hill bluff, a rare and exciting sighting for us. I wondered aloud how a visitor from the City might describe what we just saw, “Oh that poor pussycat, somehow it lost most of its tail.” Of course, there are many City folk who would recognize immediately what they luckily just observed and revel in the experience. Sadly, on the same trip we hit and killed a small hawk which we were unable to identify, carrying its prey, a chipmunk which was dropped upon impact. It also did not survive, but was probably already dead. Such is life and death in our Catskill Mountain boondocks. It is tough to witness the death of creatures, but we should keep in mind the reality that there can be no life without death. 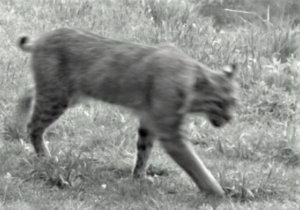 On a more positive and interesting note, the mob of turtles has left the once-crowded basking logs. I am writing this at the end of June, and occasionally they are spotted in what appears to be odd places for a turtle. These are the female turtles that are out and about seeking easily-dug soil in a sunny spot such as our gardens and soft trail edge where they are laying their eggs. The hatchlings will dig their way up and out in August or September and some will overwinter like the ones that Nancy and I expedited on their trip to the nearest pond. They are all lucky that they are not near our highways. Hopefully the traffic on Bussey Hollow Road is slow enough that drivers will see an errant turtle in time. I remember a number of years back I spotted a wood turtle crawling up the center of our road. I retrieved it and deposited it in a pond. It then happily swam as fast as it could along the bottom toward the deep center, actuating a great escape. Oddly it had only one eye. Another possible explanation for less basking now is that in the mid-summer months the painted turtles with their black shells might absorb too much heat from the sun for comfort and prefer to dive to the cool depths, which I am sure can be very refreshing. 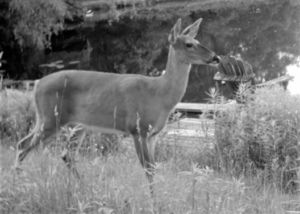 My solo walking in the many right settings can be inspirational and being solitary can be a positive and productive state for me. On some of these walks my solitude is disrupted by a long-time friend that eagerly joins me and tags along. This friend is a local that obviously has a mental problem and has been my friend now for the past 4 years. My bachelor degree in Human Psychology and many encounters with the mentally ill as a police officer have not enabled me to decipher my friend’s ongoing malady. Over the years I have tried to comfort him with gentle conversation and nourishment. Life for the mentally impaired is so unfair—an example being when he was attacked by some local ruffians as he was innocently indulging in food I had generously offered to him. Yes, my Emotionally Disturbed Grouse friend of 4 years was attacked and driven off by a marauding bunch of local barn swallow ruffians. They had caught him indulging on some sunflower seeds that I had laid out for him on our driveway. Come on: GLM (Grouse Lives Matter) too, especially that of my friend the EDG.

How I love and revel in our Andes Boondocks amongst the wild critters that thrive and survive in them, but—and it is a big but—I am rather annoyed by the yellow-bellied sapsucker that arrives at the house at 5:30 in the morning. He lands on a metal gutter and starts his machine gun-like pounding, which is like an alarm clock going off at the wrong time, and won’t shut off. In my younger days I might have gotten up at 5, set up and popped him upon arrival. Don’t pass this on as I am only ruminating. It would be illegal, and sapsucker lives matter. Then there is Macwa, a rogue black bear that as of this writing has taken down and torn asunder five bluebird houses. He has devoured their contents. Be they bluebirds, tree swallows, wrens, their young, their eggs, mice, or flying squirrels, they have all become part of Macwa’s sustenance. So be it! Repairs will be made and life will go on, especially Macwa’s. 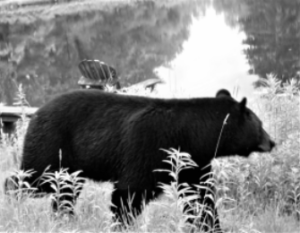 Let us all work to have the historical continuum of our healthy ecosystems persist without destructive or disruptive interference by humankind.~