To be found possibly wrong by your own son is disheartening to say the least. But when thought about deeply it is good, as he was raised to think critically and to question that what appears on the surface to be so.

Here it is:  A beautiful warm sunny day near the end of May, a great relief from the rain and clouds. I sat in a very favorite place (about two in the afternoon) with no annoying and biting black flies, as I was fully doused in OFF, totally enjoying the serenity and silence. Suddenly there was a loud and sepulchral crashing sound. This was very unusual as it sounded somewhat like a large culvert pipe coming down through the trees. The occurrence was just out of sight, in deep woods where there were no people or culvert pipes. Now to my conjecture. My thought process told me it was a large dead and somewhat hollowed out tree with no branches, with many excavated vaults by our rarely seen pileated woodpecker. Hence that very cavernous sound as it hit the ground. OK, just my quick inclination. Moments go by, and I see this very small, very black bird flying erratically between trees, the likes of which I have never seen. Its erratic flight brought it closer, and that is when I realized that it was not a bird, but a very distraught little bat. It was then that I imagined a little creature used to flying only at night in darkness to suddenly have his very dark roosting domain come crashing down and cast him out into bright sunshine. No wonder the erratic flight. My conjecture thus confirmed in my mind! My son a very outdoorsy kid, licensed guide, avid hunter: “Your confirming use of the midday idiosyncratic flight of a bat could actually have been just coincidental.” Fair enough son, but I will stick with my conjecture.

OK, a brief interruption. I interrupt because my morning stroll included a fall on my face. No bones broken, able to get up, continue my stroll, get back to the house, look at my bruised face and then realize how lucky I was. So, if any of you are my age (82) or near my age, please be careful out there as it is difficult to acquire more regular readers of my sometimes-vacuous diatribes.

Turtles and an aggressive beaver: But first the turtles. 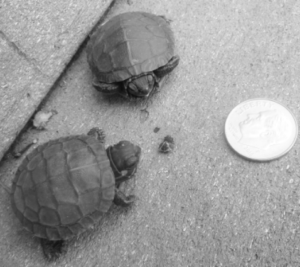 Nancy and I—back in the end of May—rescued from a potentially tortuous journey five just-hatched painted turtles and hand-delivered them safely to three different ponds. These little guys were Spring-hatched from eggs laid along a driveway last year. Apparently, these turtle eggs, laid in the Spring of the year, may hatch that Summer and some like these, will over Winter. Good luck to these little quarter-size critters.

The logs that I dragged into our lower pond for turtle-basking many years ago have pretty much sunk, leaving scant space for the large population. Now is the time to drag a couple more down, as there are some already felled and abandoned by the loggers last year. Big Momma has passed away. She grew quite large in the past couple of years growing her carapace (shell) to fifteen inches from stem to stern. She was not a painted turtle like most of her compatriots, but a snapping turtle. She, or he, succumbed to an unknown fate, but she was able to make one last effort and pull herself up on the pond bank, where she passed. Snapping turtles are omnivorous. But a warning if you are tempted to rescue one crossing a road: Be aware that they can reach almost all the way to the back end of their shell with jaws that can lock onto you. Big Momma has now been replaced by another with a carapace of about eight inches. Life goes on in the natural world.

The beaver story comes from my friend, Ann, the devoted hiker, paddler and outdoor enthusiast.

Paddling with a friend on the Pepacton she watched a beaver on what appeared to be an aggressive charge down an adjacent hill, into the water and up to her kayak. Once near her it was like, “Oh sorry, I mistakenly thought that you were a threat, but no, you’re OK”. Didn’t even give a tail slap respecting Ann.

The pervading uncertainty brews a fog that should be seen for what it is, a fog. Fogs are temporary. Do not drive too fast through it; in the end the sunshine will again shine. Concentrate on this truth: Be positive. Enjoy, safeguard and nurture where you can our remaining vibrant eco-systems!~ 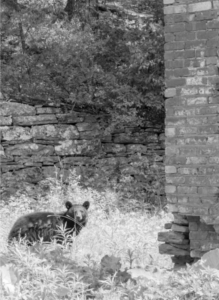