Sometimes it is hard to have an experience that initiates the writer/thought process, but not this morning. Every day I take a sometimes quick-paced, sometimes leisurely stroll around some large fields on our property since what seemed like my own almost private gym at the Margaretville Hospital is closed. This stroll includes a short stop and sit on a bench overlooking what we call the lower pond. By this time, I am being harassed by a small number of chickadees awaiting the stop where I dole out sunflower seeds by hand. This morning during the process a tree swallow swooped over the pond in search of aquatic insects on the surface. Then I was delighted to see a beautiful male cardinal looking down at me from a tall Norway spruce tree. I held up my hand offering the seeds, knowing full well that he would never make a nervy attempt to indulge. Amazingly, he was joined by a male common yellowthroat; then both hastily left their observation post. Arriving back at the house I caught a flash of bright orange in a low brushy area on the side hill; yes! not one, but four Baltimore orioles, three males and one female flitting about. And that was not enough: There was a pair of bluebirds checking out a bluebird house up there too. A great morning for an amateur birder such as myself!

There was a round stone I hadn’t seen before. A second look and it was gone. It took a moment before I realized it had not been a stone, nor was it a woodchuck, but an opossum that disappeared down an adjacent hole. This was only the second one spotted on the property in 35 years. They were not uncommon on Long Island where I grew up, and one was tagged as a “poss” by me and my natural world enthusiastic buddies back in the fifties. Possums, as I now call them, are known to have great memories as to where food is located or stored. This I can attest to, and wrote about many years ago in our Andes Gazette. It was about a possum that had lost a good portion of his prehensile tail—how we will never know—that would visit my bow hunting tree stand for a handout of a portion of my precious peanut butter sandwich, tossed to him every morning that I was up overseeing his territory. 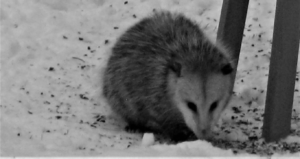 It is wonderful to have great neighbors that have similar interest in both the Andes environment and our wildlife friends. Down the Hollow live Richard and Alison who are both ardent and very experienced birders. They informed me one day of a very exciting observation that they had just made on one of our hillsides: a small flock of five golden winged warblers. I looked up these warblers in Sibleys Field Guide to Birds and found that they are listed as uncommon and declining in numbers. What great news to hear that this endangered species is here and I hope they fare well, procreate and proliferate. Alison noted that a single golden wing was spotted in Riverside Park on the West side of Manhattan and attracted dozens of birders. That is part of my old police precinct; I don’t have to handle the crowd presently, thank you!

Now, as I take my daily walk out of isolation and venture into the forest, I begin to savor the joys of the natural world, and consider the fact that I am one of the luckiest people in the world. I truly believe that if one is able to get into the woods the results can be relaxation, happiness and sometimes great wonder. I remember when I was a young child in Flatbush, Brooklyn, my Mom would take me for a walk to a small patch of tall trees the size of a city block. They were mostly oaks, and I would collect acorns from the ground and keep them in cigar boxes. Over time my collection continued to grow until one day Mom—with no explanation— said we could not go down there anymore. It wasn’t until my Dad drove me by that special place that I was able to see that all the trees were gone and bulldozers were now wreaking havoc. “They are going to build houses,” Dad stated solemnly knowing that it would hit me hard. It did. Destruction of many of my special places followed me through my formative years, imprinting in my mind the need to enjoy and savor that which is here now, as it may not be here in the future. This is the main reason Nancy and I chose our beloved forested and old-pastured acres here in Andes located in the NYC watershed, to be preserved and protected hopefully forever. “Continued growth and development for the sake of growth and development is the ideology of a cancer cell,” a rather strong quote by author and environmentalist Edward Abbey. As the cartoon character stated back in the 1950s, “We have met the enemy and he is us.”~