Yuval Noah Harari’s global best-seller Sapiens has cut a wide swath through the world of thinking people since it appeared in 2015. This biological and cultural history of the world operates like an ice-breaker, smashing received notions most of us have carried around for decades and replacing them with fresh interpretations of familiar events. Although it’s long and challenging, the book is eminently, often deliciously, readable.

In explaining the invention of money, Harari (an Oxford educated history professor at Hebrew University in Jerusalem) offers the plight of an apple grower who wants to barter apples for a pair of boots. But suppose the shoemaker doesn’t need apples just then, and even if he does, how many should he ask for? What are his boots worth in terms of apples, especially now that leather hides are getting scarce? And last time it was only a pair of ladies shoes he made, and the apples he received were a different kind. Having captured us with this example, before we know it, he’s discussing the way money evens out the value of commodities between empires.

Almost anywhere you open this book, the discussion will draw you in. Harari describes Capitalism, convincingly, as a Ponzi scheme that, in order to function, must rely on future profits and endless growth. He interprets religion’s evolution from animism to polytheism to monotheism and beyond as a response to the fact that humans went from living in tiny nomadic groups, to agrarian villages, to commercial and political empires, to one de-centered, post-industrial, information-driven globe. The most memorable parts for me were his account of the change from a hunter-gatherer to an agricultural mode of life and his description of humanism as a religion.

Harari labels the Agricultural Revolution history’s biggest fraud. Classically considered a huge step forward in establishing what we call civilization, it propelled humankind from a varied and relatively leisurely nomadic existence in which men and women had few possessions but also few demands on their time and energy, to a life requiring hours and hours of grueling physical labor.  By making it possible to feed a large population, crop cultivation trapped humans in a vicious cycle, forcing them into the hard labor needed to support the population that cultivating plants monoculturally had brought about. “On the whole,” he writes, “foragers seem to have enjoyed a more comfortable and rewarding lifestyle than most of the peasants, shepherds, laborers, and office clerks who followed in their footsteps.” Not what we learned in school.

There’s more. Harari points out that before the Agricultural Revolution, hunter-gatherers worshipped local nature spirits—what we call animism—which “took into consideration the outlook and interests of a multitude of other beings,” including animals, plants, and trees. Farmers, on the other hand, “manipulated plants and animals, and could hardly degrade themselves by negotiating with their possessions. Hence the first religious effect of the Agricultural Revolution was to turn plants and animals from equal members of a spiritual round table into property.” 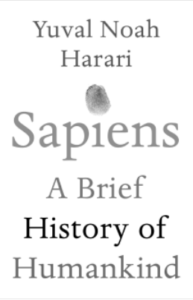 This was a change whose effects can’t be understated. By declaring all earthly life inferior to that of Homo sapiens, thus turning the earth into an “it” rather than a “thou,” the Agricultural Revolution had dire consequences later on in the destruction of planetary ecosystems, the torture and killing of millions of factory-farmed animals, and the scarcity of basic resources such as clean water. Unexpectedly, this ancient development links itself to the contemporary religion of liberal humanism.

Humanism, according to Harari, holds that “Homo sapiens has a unique and sacred nature, which is fundamentally different from the nature of all other animals and of all other phenomena,” and that “all other beings exist solely for the benefit of this species.” The liberal version claims in addition that each individual is endowed with fundamental rights—such as life, liberty and the pursuit of happiness—which cannot be taken away—a founding doctrine of American democracy which, in the context of environmental degradation, no longer seems so inevitable and right.

Questioning the notion that the modern era is anti-religious, Harasri goes on to explicate, in addition to humanism, the religious nature of contemporary ideologies such as Communism, Capitalism, and Nazism. And then, remarkably, he asserts flat-footedly that “scientists studying the inner workings of the human organism have found no soul there,” as if we expected something different. In concluding from this that “human behavior is governed by the same hormones, genes and synapses that determine the behavior of chimpanzees, wolves, and ants,” he seems justified. This statement, after all, is in keeping with a claim he makes early on that Homo sapiens was never more than just one species of ape among many. But it exhibits a naïve acceptance of materialism as the point beyond which we cannot go in understanding humankind. Odd, in light of the fact that Harari is a practicing Buddhist. But never mind. Page for page this book is more stimulating and thought-provoking than anything I’ve read in a very long time. It’s guaranteed to give you a few good jolts. Read it now, while you still have time.~