The only breed of laying pullets (young females) to be had at the local store in early March were cute fuzzy little yellow ones called Leghorn. Yes, the Foghorn Leghorn cartoons of my youth were based on an actual breed. Adults have all white feathers with a bright red crest, and lay white eggs.

According to my Internet search, the breed can also come in different colors, but the white ones are the most commonly used of all commercial laying hens. They originated in Italy and were brought here in the 1800s. Usually they are not used for household coops, however, because they are “not as friendly as other popular breeds.” I soon found out that they were not kidding!

I had been told that the reason baby chicks were kept under red heat lamps was because if a chick had a red spot on them that was visible to the others, the others would peck at it. I have always used a red heat light during the first couple of weeks, but when I see that the chicks are staying away from the area where the light shines, I shut it off during the day to save on electricity. Since our heating system allows the house to get much cooler at night, I turn on the heat lamp at night until their feathers are in and they are ready to go to the coop. For their last few nights in the house, I don’t turn on the lamp at all. I have raised four different breeds in this way and have never had a problem with pecking. 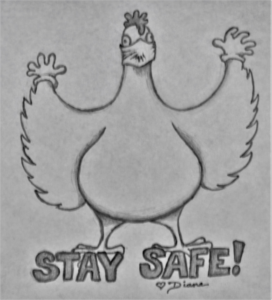 As this new group started getting their feathers and the red light was shut off during the day, however, a horrible thing started to happen. To our great distress, those chicks started pecking on each other until most of them had big bloody patches that the others kept pecking at. They were literally eating each other! I even saw one peck at her own bloody chest.

It was so horrible that my husband Steve started helping. We kept the red light on at all times and blocked off as much natural light as we could. That helped a little, but they still continued. I tried distracting them with new foods. That helped even more, especially boiled eggs (which they still go crazy for), but the attacks still continued on occasion. Steve learned from the Internet about a product called Blu-Kote. It’s a disinfectant that’s colored blue to help disguise the wound. Spraying that on their wounds finally got things under control.

When we went to the store to buy the Blu-Kote, we noticed that their Leghorn chicks looked even worse off than ours did. All the other breeds there looked fine. I vowed to never get Leghorns again!

In early April they graduated to the separated area of the chicken coop. They probably don’t need it anymore, but I set up and turned on the red heat lamp, just in case. I try not to think about the electric bills. At least all of the chickens are enjoying the extra heat during the cold spells that we’ve had.

Although they seem to have stopped attacking each other and their feathers have grown in nicely, I am dreading the day these chicks are ready to be let loose. Whenever I put my hand into their enclosure to add food or change their water, they start pecking at my hand! I am hoping and praying that the other chickens will be able to put them in their place, and that they will then outgrow the terrible inclinations of their youth.~