When a novel is as good as this one is, it’s hard to know where to begin. Fans of Olive Kitteridge, which won the Pulitzer Prize in 2009, won’t be surprised to hear that this sequel—which stands on its own—is as good as, and perhaps even better than, the original. A series of linked short stories, the narrative takes place in the picturesque coastal village of Crosby, Maine. Each chapter focuses on a different character, or group of characters, with Olive’s story predominating and linking the others together. 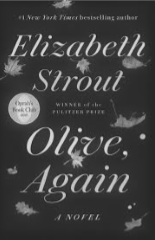 Olive is her usual self: prickly, brutally honest, impulsive, and kind. Also, in this version, ready to reflect on her own shortcomings. The way people come to self-knowledge is a unifying theme in the book. Another is honesty. In Chapter One Jack Kennison, a retired professor who will become Olive’s second husband, reflects:

He understood he was a seventy-four-year-old man who looks back at life and marvels that it unfolded as it did, who feels unbearable regret for all the mistakes made.

And then he thought: How does one lead an honest life?

In some way, the novel is always trying to answer this question. For instance, in a late chapter titled “Exiles,” with some notable exceptions, the characters lie to each other throughout the entire episode, and in a way so common, and so realistic, that one is shocked to recognize how many times one has done exactly the same thing with hardly a second thought. Most of the lies are well-intentioned, designed to save other people the hurt or embarrassment that the truth would certainly cause. In fact, when someone finally does speak the truth—a childless, not too attractive Unitarian minister who can’t keep herself from telling her beautiful, wealthy sister-in-law that she’s talking about her grandchildren too much—it does cause embarrassment—and then understanding. When the sister-in-law, who has had too much wine, finally exclaims “You hate me!”, as readers, we feel better that things are out in the open.  But the characters don’t: they suffer shock, embarrassment, remorse—what one would expect. No judgment is passed by the author on these occurrences. Things are like that, she seems to say, so be it. And this is what makes the novel so compelling.

Over and over again I felt, as I read, that I was being told the truth. Not in order to prove a point or to expose some platitude, but just to get down on paper—right there, for everyone to see—the way things really are. Jack Kennison, who has had a prostate operation, wears Depends. While eating a lobster sandwich Olive gets a spot of mayonnaise on the jacket she just made for herself and has to rush home to put hot water on it so it doesn’t set. She is glad the same jacket covers her behind. For forty-one years she never gave herself completely to her first husband when they were having intercourse. And so on. One after another the huge disappointments, small awkwardnesses, and inevitable sadnesses of human life are exposed in this novel without fanfare or comment, and the result, strangely, is refreshing, even satisfying. It’s good to be in the presence of the ways reality falls short of our desires. It relieves us of the need to pretend.

Sometimes the effect is one of painful hilarity, as in the case of an endless baby shower where every guest is forced by unspoken rule to comment, favorably of course, on every gift as it’s opened and passed around the room. Sometimes the effect is agonizing, as in the visit Olive’s son and new family make to his mother one weekend. In both cases, the truth is instructive, at least when we readers experience it as part of a narrative, because it adds to our understanding of the way things are.

The expanded comprehension Strout affords her readers includes ecstatic moments as well, moments usually encountered in the course of a normal day, as when a character looks out the window and sees the bare brilliant fields of November, or falls in love with another person out of the blue. The stories move from dissatisfaction to passion to contentment and back again, as characters’ lives are punctuated by loss, gain, enlightenment, confusion, one stage leading naturally and inexorably to the next. The narrative has a wave-like motion. It does not go from rising action to climax to denouement like the plot of a well-made play or of most novels, but from one thing to another. The effect is neither happy nor sad, but blessedly real.

In the book’s final chapter, Olive makes a new friend—a character from Strout’s first novel, Amy and Isabelle. They talk about their relationships to their respective children—Olive’s son, Isabelle’s daughter—wishing they had done a better job as mothers, though each of them knows she is loved by her child. Right up until the end, we, and they, are trying to make sense of life, but it never happens. Things are always going back and forth between insight and ignorance, fulfillment and deprivation. And that, we are made to feel, is perfectly okay.~